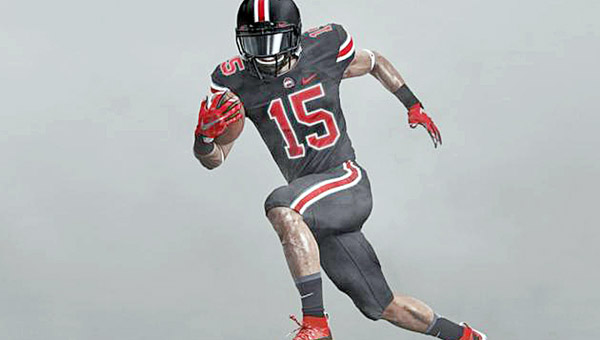 COLUMBUS (AP) — One of the first questions for Ohio State coach Urban Meyer at his press conference Monday was not about the use of dual quarterbacks in the red zone, or how Braxton Miller is being utilized as a receiver.

No, what seemingly all Ohio State fans are talking about is the reaction to breaking tradition and wearing all black uniforms for the first time.

Forget scarlet and gray, there’s very little of either in the Nike alternative pants, jerseys and black matte helmet that will be worn one-time only vs. the Nittany Lions.

Meyer was probably being coy because Nike representatives first approached the university two years ago with the idea of black uniforms. The finished product was unveiled Oct. 3.

“I’m indifferent about it. Very indifferent,” safety Tyvis Powell said. “I appreciate the jersey, period. Just being able to put the Ohio State jersey on is good enough for me.”

Others, including Meyer, think otherwise. The special uniform is part of the package to entice recruits and create an electric environment in the “Horseshoe” for the first home night game of the season.

“We love night games and obviously the new unis and the crowd,” Meyer said. “I just hear our players talk about it.”

Ohio State has worn a special uniform on occasions and last season donned all white for the first time in recent history at Penn State in a break from the usual gray pants.

“It’s just a special opportunity to be one of the first teams that switches up Ohio State’s traditional jerseys,” defensive end Sam Hubbard said. “We have a great responsibility to play well in it.”

In today’s world, flashiness matters, although Penn State with its standard issue blue and white uniforms would disagree.

But Oregon has made great strides in football in part because its numerous uniform combinations attract the attention of high school athletes.

“We’re not going to be Oregon,” Ohio State director of athletics Gene Smith said. “We’re Ohio State University, and we’re going to pick one game every year where we try to do this.”

He knows there’s a segment of fans that are upset by the uniforms. Some simply don’t like the move away from scarlet and gray while others see them as indistinguishable from what Cincinnati, Louisville, Rutgers or countless highs schools with black and red colors might wear.

“We’re blessed here, (that) an institution has such great tradition and history,” Smith said. “You have to make sure you respect that. And there are certain things that become untouchable in that regard.

“At the same time, you have to recognize that our demographic is changing. Our world is changing. . Recruits are impressionable today and have a great deal of materialistic interest. So reality is we’re going to respond to that.”

Linebacker Raekwon McMillan said Meyer showed him an early design for a black outfit during the recruiting process.

“When he brought in the uniform he was trying to impress me,” McMillan said.

Defensive end Joey Bosa said the new look is “sick” but doesn’t think his brother, Nick, a 2016 commit to Ohio State, is swayed by a school’s choice in clothing.

Jim Walker jim.walker@irontontribune.com   If you saw Ironton’s game last week, get ready for the instant replay. The Ironton and... read more