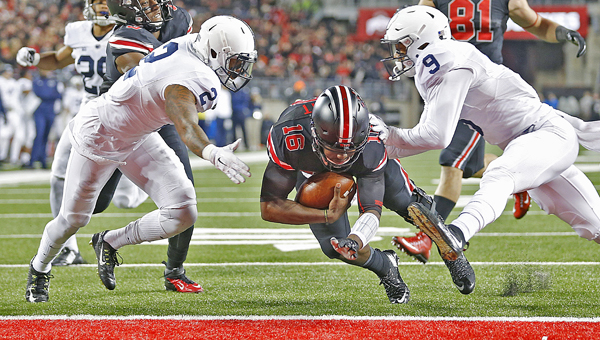 COLUMBUS (AP) — J.T. Barrett played finisher for Ohio State, running for two red-zone touchdowns in the first half and then taking over full-time for Cardale Jones in the third quarter, as the top-ranked Buckeyes played another round of quarterback roulette in a 38-10 victory against Penn State on Saturday night.

Wearing black uniforms for the first time, the Buckeyes didn’t look like themselves, though they did look a lot more like the dominant team many expected the defending national champions to be this season.

Ohio State (7-0, 3-0 Big Ten) still doesn’t have a definitive answer at quarterback, but the Buckeyes have a 20-game winning streak.

Jones started, as he has all season, but was only 9 for 15 for 84 yards. Barrett, as he did last week, entered when the Buckeyes got inside the 20 in the first half and helped Ohio State complete three trips there with touchdowns. After two unproductive third-quarter series, Jones was benched.

Freshman Saquon Barkley provided most of the offense for Penn State (5-2, 2-1) with 194 yards rushing.

Ohio State coach Urban Meyer seemed to find a two-quarterback combination last week with Jones playing the big part of the field and Barrett taking over inside the opponents’ 20. It worked great in a rout of Maryland. Not so against a pretty good Penn State defense that came in leading the nation in sacks.

So again the question is, as it has been since last January, who is the Buckeyes No. 1 quarterback? Jones, who led the Buckeyes to the national championship, or Barrett, who was the Big Ten player of the year.

Ezekiel Elliott was once again a constant for the Buckeyes with 153 yards rushing, his 12th straight 100-yard game.

Aside from Jones’ struggles, it was Ohio State’s best game of the season. Braxton Miller got involved in a variety of ways with eight touches for 63 yards and a touchdown and the Buckeyes committed no turnovers.

Penn State knows exactly who its quarterback is but Christian Hackenberg was again poorly protected against Joey Bosa and the Ohio State pass rush. Last season, Bosa ended Ohio State’s double-overtime victory with a sack and he had one of five sacks Saturday night against Hackenberg. The junior seemed to be favoring his back after getting dumped in the third quarter and finished 7 for 13 for 120 yards and a touchdown.

Penn State leaned on Barkley, who had missed the last two games with a foot injury. He made a difference, but his long touchdown run that could have put Penn State up 10-0 in the first quarter was wiped out by a holding call on right guard Brian Gaia.

Barrett gave Ohio State a 7-3 lead with a 5-yard TD run early in the second quarter and Elliott finished the next drive by darting and bouncing off tacklers for a 10-yard score. Barrett closed the next drive, too, taking a keeper on the zone read 13 yards for the score.

Penn State opened the second half with a three-play touchdown drive, capped by DaeSean Hamilton stretching to the pylon for an 8-yard touchdown reception to make it 21-10.