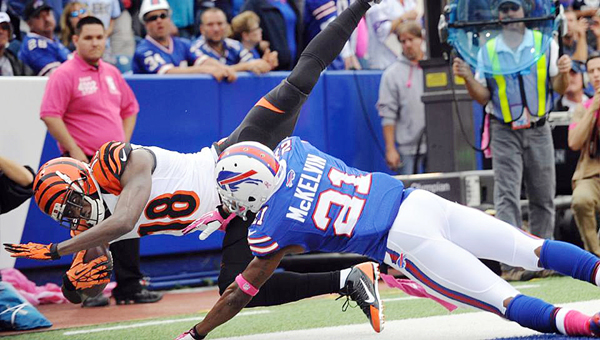 Cincinnati Bengals’ wide receiver A.J. Green (18) makes a diving catch in the back of the end zone during Sunday’s game in Buffalo. The Bengals beat the Bills 34-21. (Photo Courtesy of The Cincinnati Bengals.com)

ORCHARD PARK, N.Y. (AP) — With A.J. Green attracting much of the Buffalo Bills’ attention, Bengals receiver Marvin Jones made a suggestion to quarterback Andy Dalton to open the third quarter.

“I told Andy to just throw it because I’m go to run and get it,” Jones said, referring to his 42-yard, over-the-shoulder catch that eventually set up his 10-yard touchdown on the Bengals opening drive of the second half.

“If you’re going to take away one person, we’ve got six, seven other people that can do the job. And it went my way.”

The Bengals (6-0) and their multi-threat offense continued to roll in a 34-21 win on Sunday in which they matched the team’s best start to a season in franchise history.

Giovani Bernard also scored on a 17-yard run in a game the Bengals blew open by scoring 17 points on their first three drives of the second half.

Dalton went 22 of 33 for 243 yards, and Jones took advantage of one-on-one coverage with a team-leading and career-best nine catches and 95 yards.

“You never know who’s going to have a big week,” Dalton said. “Today, Marvin had a bunch of catches. It’s nice to have the ability to spread it around.”

The Bengals, who enter their bye week before traveling to play at Pittsburgh on Nov. 1, were also 6-0 to start the 1975 and ‘88 seasons.

Bills coach Rex Ryan found out the hard way how difficult it is defending the Bengals.

The Bills (3-3) were in no position to keep up because of a banged-up offense and tiring defense in losing their third consecutive home game.

And now they’re flying to London for a game against Jacksonville next week not knowing who’ll be healthy enough to play.

Receiver Sammy Watkins hurt his left ankle while making a 22-yard touchdown catch, and was spotted walking with a cane in the locker room. Defensive tackle Kyle Williams was carted off the field with a left knee injury. And starting quarterback Tyrod Taylor’s status remains uncertain after being sidelined with a sprained left knee.

General manager Doug Whaley said the injuries coupled with traveling overseas makes it even more complex for him in scrambling to add players. The first concern is making sure any new additions have a passport.

“It’s going to put us in a bind. We’re going to go straight to work on that now,” Whaley told The Associated Press as he and the team prepared to fly out immediately after the game.

“It narrows your pool down because some guys don’t have passports. And the pool’s already reduced because it’s the middle of the season and everybody’s trying to add guys.”

Ryan didn’t any definitive updates on the status of his injured players.

At least running back LeSean McCoy, who scored on a 4-yard run, returned after missing two games with a pulled left hamstring. Receiver Percy Harvin, however, didn’t play because of a hip injury, and receiver Marquise Goodwin didn’t return after hurting his ribs.

“Sammy, Kyle, LeSean, Percy: These are actual stars in the league, not just stars on our team,” linebacker Nigel Bradham said. “It’s football. You know (injuries) are going to happen. But when it’s that many of them, it’s tough on you.”

Buffalo’s defense tired after limiting the Bengals to just 17 points in the first half, in which Cincinnati enjoyed an average drive start of midfield.

As for the Bills offense, it sputtered. After Manuel scored on a 2-yard run to cap an 80-yard game-opening drive, Buffalo combined for 0 yards offense and no first downs on its next four possessions.

Manuel finished 28 of 42 for 263 yards with a touchdown and interception in his first start in a little more than a year.

NOTES: Dalton won the 22nd road game of his four-plus-year career. Of NFL quarterbacks in the Super Bowl era, Dan Marino, Ben Roethlisberger and Matt Ryan rank first in winning 23 road games in their first five seasons. … McCoy’s 90 yards rushing were one short of matching the total Bills running backs combined in their previous two games. … The Bills were held without a sack for the first time this season and second time in their previous 35 games.

CLEVELAND (AP) — For the Browns, it always seems to end in heartbreak against the Broncos. The Denver drought endures.... read more