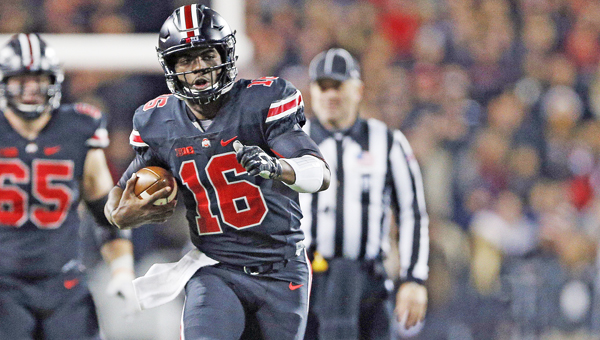 “I have an idea, but I want to make sure I visit with everybody and make sure we’re doing the right thing,” he said Monday.

Meyer must choose between Cardale Jones, who has started all seven games this season, and J.T. Barrett, the starter in 2014 before breaking his ankle in the final regular-season game against Michigan.

Meyer was to meet with the two players Monday afternoon and announce his decision to them.

“If there’s a change, it’s always delicate,” said Meyer, noting the human element of dealing with players and their emotions. “This is not a business here. We’re going to do what’s right for the team first, but does the individual and all that take matter within the confines of this building? More than anybody will ever know. And we’re extremely proud of that.”

Barrett has been coming on strong the past two weeks since Meyer began inserting him when the Buckeyes (7-0, 3-0) reach near the opponent’s goal line.

Meyer expanded Barrett’s role in last Saturday’s 38-10 win against Penn State by replacing Jones late in the third quarter and going with Barrett the rest of the way regardless of field position.

Barrett then led OSU to two touchdowns in the fourth quarter. For the game he rushed for 102 yards on 11 carries and two TDs and was 4 for 4 passing for 30 yards and two more touchdowns. Jones was 9 for 15 for 84 yards.

“Whoever that person might be, it’s all about efficiency and making sure that we utilize and score in the red zone (and) don’t turn it over,” left guard Billy Price said.

In its first five games, Ohio State scored six touchdowns and had six field goals in 16 tries in the red zone.

In the past two games the Buckeyes are 12 for 12 on 11 touchdowns and a field goal, with Barrett completing the drives on all but one when Jones threw a 19-yard TD pass to Braxton Miller vs. Maryland.

The Buckeyes have also gone two games without a committing a turnover after doing so 13 times through five games.

Each quarterback has his strengths. For Jones it’s the ability to throw deep as he did in his first start last season in the Big Ten title game against Wisconsin when he connected with Devin Smith on touchdown passes of 39, 44 and 42 yards.

But Smith graduated and Meyer has not found a suitable long-ball replacement, neutralizing for the most part one of Jones’ weapons.

Meanwhile, Barrett is a bigger threat to carry the ball, such as his 86-yard TD run on the frozen turf at Minnesota last season.

“He comes in and does a really good job of running that read option,” left tackle Taylor Decker said.

The possibility of Barrett taking off with the ball makes it harder to key on running back Ezekiel Elliott, who gained 153 yards against Penn State for his 12th straight game of 100-plus yards.

Scarlet Knights coach Kyle Flood said the Buckeyes can’t go wrong with either of their quarterbacks.

“I think it’s become very evident you’d better prepare for both of them,” he said. “They are certainly both excellent players with a little bit different skill sets. But when they come in the game, you’d better be ready to defend what they do.”

NFL Network apologizes to Bengals for nudity on TV

CINCINNATI (AP) — The NFL Network has apologized to Bengals players who were shown naked in the locker room during... read more