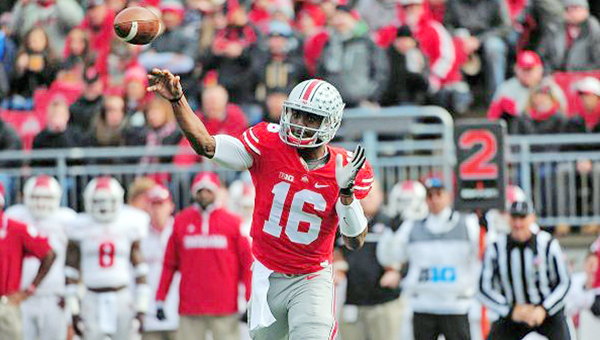 COLUMBUS (AP) — The starting quarterback job at Ohio State is J.T. Barrett’s now. Though maybe FOR now is more appropriate.

The never-ending story of this college football season entered a new chapter Tuesday. Buckeyes coach Urban Meyer announced that Barrett would replace Cardale Jones as the starter when No. 1 Ohio State plays at Rutgers on Saturday.

This was no unexpected plot twist. The move seemed inevitable after Barrett accounted for four touchdowns in relief of Jones against Penn State on Saturday.

Conceivably, Barrett could take the job and run with it and the quarterback questions will end in Columbus. But as Meyer said after the 38-10 victory against the Nittany Lions: Whatever it takes to win.

“Cardale is going to be a very active part, too,” Meyer said Tuesday during the Big Ten coaches’ conference call. “Hopefully, we’ll keep him very much involved. So, it was a difficult decision. But red-zone production and third-down production were the two areas that made the difference. (Barrett) earned that with the way he played Saturday.”

Barrett helped the Buckeyes break out of a red-zone funk, guiding the offense from inside the 20 into the end zone six times in six trips two weeks ago against Maryland.

The trend continued against Penn State. Barrett ran for two touchdowns and threw two more in six red-zone trips for the Buckeyes. The other resulted in a field goal.

The Buckeyes (7-0) are 81st in the nation in converting third downs into first downs at 37.5 percent. They are 72nd in converting red-zone trips into touchdowns at 60.7 percent (17 for 28), and most of those TDs have come with Barrett on the field.

The way the Ohio State offense is built this season Barrett seems the better fit. He is nifty runner and quick decision-maker in the zone-read option. He ran for 102 yards on 11 carries against Penn State, neutralizing a good pass rush that was giving Jones problems.

The 6-foot-5, 250-pound Jones has one of the strongest arms in college football, but the Buckeyes have not been able to use it to exploit defenses down the field. Last season, when Jones took over in the postseason, field-stretching receiver Devin Smith became a force. Theses Buckeyes don’t have that kind of vertical threat.

“I have two great guys that I have a tremendous amount of respect for. I’m just trying to do the right thing,” Meyer said.

Barrett lost a closely watched quarterback competition to Jones that started not long after the Buckeyes won the national championship in January. Jones started the last three games of Ohio State’s title run, beating Wisconsin, Alabama and Oregon, after Barrett was brilliant in the regular season.

Barrett accounted for a Big Ten-record 45 touchdowns and finished fifth in the Heisman Trophy voting.

Braxton Miller, a two-time Big Ten player of the year, also figured to be in the mix at quarterback if his surgically repaired shoulder allowed. He dropped out of the race in July to become a receiver.

Not until the Buckeyes offense took the field for the first time this season on the Labor Day night at Virginia Tech did the quarterbacks know who would start. Jones was the man, but he never took firm hold of the job.

He has seven touchdowns passes against five interceptions and ranks 48th in the nation with a passer rating of 141.23. He threw for just 84 yards in last week’s win over Penn State and was replaced by Barrett for good after two series in the third quarter.

Jones also was benched in the second half of the Northern Illinois game, but Barrett wasn’t particularly effective, either, and Jones continued to start.

Against Maryland two weeks ago, Jones played the big part of the field and Barrett entered when the Buckeyes reached the red zone. Barrett ran for three touchdowns in that game.

A two-quarterback system, like the one Meyer used to win a national title at Florida in 2006 with Chris Leak and Tim Tebow, seemed to be emerging. Not quite, though at this point it seems reasonable to expect anything from Meyer. If Barrett struggles or Jones is a better matchup in a particular spot, Meyer seems more than willing to switch things up again.

There have been no signs that this game of quarterback roulette is causing problems. Tackle Taylor Decker said as much before Meyer made his decision public.

“It’s not creating a divide in the locker room, which would be a downfall if that were to happen,” he said.

It’s hard to be unhappy when undefeated.