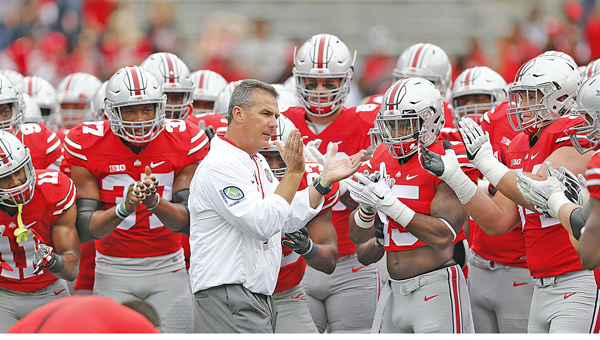 Ohio State Buckeyes’ head coach Urban Meyer said he just wants his team to keep getting better each week, something he believes his unbeaten team has accomplished. The Buckeyes play at Rutgers on Saturday night. (MCT Direct Photos)

COLUMBUS (AP) — Ohio State has another chance to make its case Saturday against Rutgers as to why it should remain the top-ranked team.

So far, the voters in The Associated Press poll have not been impressed with the Buckeyes despite their unblemished record (7-0, 3-0 Big Ten).

After becoming the first unanimous No. 1 preseason pick with 61 votes, Ohio State received 28 this week, one more than the previous, and is 12 points ahead of second-place Baylor.

“There are probably 10 programs in America that are held to extremely high standards and we’re one of them,” coach Urban Meyer said.

“I hear a question what’s wrong with Ohio State, why aren’t things working out? Everything’s fine. We’re just trying to get a little better every week and win a game.”

The disappointment could be in part because Ohio State hasn’t matched the emphatic finish to the 2014 season when it beat Wisconsin in the Big Ten title game (59-0), Alabama in the College Football Playoff semifinal (42-35) and won the championship with a 42-20 win against Oregon.

“People are going to say, ‘Why can’t you play like you did against Wisconsin last year?’ “ left tackle Taylor Decker said. “There’s always going to be a ton of questions and everything, especially when people are gauging us off those last three games. I think we’re farther along than we were last year.”

Ohio State opened strong this season with a 42-24 win at Virginia Tech, the only team to beat OSU last season.

That was followed by a 38-0 win over Hawaii, although the lead was only 14-0 at the half. Ohio State then was in a 10-10 halftime tie with Northern Illinois before winning 20-13. The Buckeyes next beat Western Michigan 38-12.

The Big Ten opener at Indiana produced a nail-biter that Ohio State won 34-27, thanks to a last-second goal-line stand. In the next game, Maryland tied the score at 21 early in the third before the Buckeyes pulled away for a 49-28 win.

Doubts about the Buckeyes’ chances of repeating as champions grew louder.

“It comes with what we did last year,” center Jacoby Boren said. “Everyone expects us to be the No. 1 team in the nation. We have high expectations of ourselves. In the end it doesn’t come down to what everybody on the outside says, it’s what we’re doing.”

It took the first home night game of the season, special all-black uniforms and playing rival Penn State last week for the Buckeyes to finally flaunt their talent in a 38-10 win.

Meyer said considering the strength of the Nittany Lions’ defense, it was one of the best offensive efforts by his team in his four years as coach.

“The first game against Virginia Tech we put together a good game then kind of fell off a little after that,” Boren said. “This past week was a good start to it.”

If it’s beginning to look like 2014 for Ohio State, it might be because quarterback J.T. Barrett, who was 11-1 as astarter last season before being injured, on Tuesday was named to replace this year’s starter Cardale Jones.

Barrett had a breakout game playing most of the second half against Penn State.

“You can kind of see where we picked up (from) last year, especially when you see the explosive run plays,” left guard Billy Price said. “It was a great feeling, you get a lot of energy, then you get the crowd in the stadium behind you. It’s flashbacks to old times.”

Path to 7-0 not easy for Buckeyes, Spartans

The Associated Press   The college football season just hit the halfway point, and we’re moving into the meat of... read more