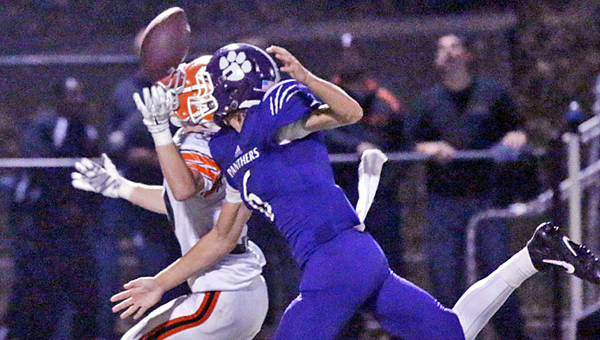 The Ironton Fighting Tigers played keep away with the Chesapeake Panthers as they dominated the time of possession, then made some key plays in a 21-14 win on Friday to clinch at least a share of the Ohio Valley Conference title.

“We definitely controlled the ball. Offensively, we were moving the ball — slow and methodical — just the same old thing. Just grinding it out. (Chesapeake was) doing a good job,” said Ironton coach Mark Vass.

“The biggest thing is what I told them in the locker room was that the kids stepped up and made big plays when we needed them — the passing game, the defense, the interceptions. I just thought it was a well-played game. I believe we only had the one penalty. But the big thing to me was that we just got big plays.”

Chesapeake coach Andy Clark used a surprise spread formation against the stout Ironton defense in an effort to move the ball and score quickly because of the Fighting Tigers’ penchant of controlling the clock.

“We spent too much time on defense in the first half. We played hard for four quarters. Game plan-wise, defensively I felt we were in what we should have been in,” said Clark.

“We made plays at times. First down was key. We didn’t make enough stops on first down to keep them in second and long, keep them behind the chains.”

Ironton is now 5-4 overall and 5-0 in the conference. The Fighting Tigers finish the season at South Point next Friday.

“First year in the league, obviously that was a big goal of ours to win the league. Now you’ve got a share of it, but we’ve still got business to handle with South Point. This was a big one for us in every way. It still keeps your chances alive for the playoffs and a tie for the league,” said Vass.

The trio of Andrew Barker, Desmond Young and Garrett Carrico combined for 194 yards on 53 carries. Barker ran 19 times for 74 yards, Young 20 times for 69 yards and Carrico 14 times for 51 yards.

Quarterback Jake Isaac was 5-of-7 for 104 yards and a touchdown.

“We just told our line to fire off the ball and give the backs holes and we hit them,” said fullback Desmond Young. “Me and Barker know we have to lead (block). We know we have to step up in big-time situations and make plays for the team.”

The Panthers were a combined 6-13-1 passing but suffered two costly interceptions.

Ironton took the opening kickoff and drove from its own 32 to the Panthers’ 17. A holding penalty back the ball up 12 yards and the drive stalled at the 26.

The Panthers then went 71 yards in just six plays capped by J.W. Bartrum’s 1-yard scoring run as time expired in the quarter.

Quarterback Casey McComas had a 28-yard run and Wilcoxon a 29-yard run to key the drive.

“We knew they ran (the spread) a little bit, but it’s not part of their regular offense. They kind of caught us there (being) the first quarter especially. Then at halftime, besides that trap, we just went back to what we practiced all week,” said coach Vass.

Ironton answered with a 74-yard, 21-play drive that ate up all but 31 seconds of the second quarter. Young went the final 3 yards and Tre Neal’s kick tied the game.

With Ironton chewing up the clock, the Panthers had to score quickly and that’s what they did.

McComas was hurt on the first play of the third quarter, but on the second play Brown broke free and ran 79 yards for a touchdown to put Chesapeake ahead 14-7.

“We had a little momentum there on the trap play when Maccoy scored. In big games like that you’ve got to come up with big plays like that. Stuff has to go your way when you’re the underdog, and you can’t turn the ball over. (The two turnovers) were enough to make the difference tonight,” said Clark.

Ironton drove to the Panthers’ 11-yard line but a fourth down pass caught by Travis Carey in the end zone was ruled out of bounds and the Panthers’ defense had held.

Chesapeake used a 30-yard run by Wilcoxon and a 13-yard pass from Austin Browning to Austin Oldaker to reach the Ironton 39, but Carrico came up with a big interception to stop the drive at the 2:45 mark.

Ironton then went 68 yards in eight plays that culminated on a 36-yard touchdown pass from Isaac — who audibled on the play — to Eli Willis who juggled the ball momentarily after it was tipped by Browning.

Willis gained control and scored to tie the game with 11:05 to play.

“My quarterback threw me an amazing pass, right over the defender’s hands. It was a good call by my quarterback,” said Willis.

“All (the defensive back) did was skin it. I was juggling it a little bit and then I just tucked it in and we got the TD. Then Travis came up with the big play. I’m just happy we got the ‘W,’” said Willis.

On the Panthers’ next possession and needing to move the ball quickly in fear they might not get it back, a third-and-11 pass by McComas was intercepted by Carey and returned 36 yards for the touchdown just one minute after the previous score and Ironton led 21-14.

“I just saw they were coming in motion and I thought he’d be running a 5-and-out and I jumped it and sure enough he threw it and I picked it,” said Carey who admitted his eyes lit up when he saw the pass coming his way.

“Oh yeah. Bigger than the moon.”

Chesapeake was forced to punt on its next possession but managed to force Ironton to turn the ball over on downs with 3:08 to play.

But a fourth down pass fell incomplete with 1:22 left and Ironton ran out the clock.

“They were playing eight in the box and they were bringing that safety up as a ninth guy. But just like last week, it was halftime adjustments. We just got a hat on a hat and after that we were rolling,” said Ironton center Brock Midkiff-Sands.

Clark praised his team for their play and admitted Ironton made more big plays.

“The second half things kind of changed up. They made some adjustments, we got nicked up, we couldn’t answer with what we’re good at,” said Clark.

“Defensively, we continued to make good plays. We tipped a pass and it’s bobbled around and the guy catches it for a big play for a touchdown, and then the pick six, so obviously a momentum swing.”

Chesapeake travels to Coal Grove next Friday and needs a win to try and secure a playoff berth in Region 21 of Division VI.