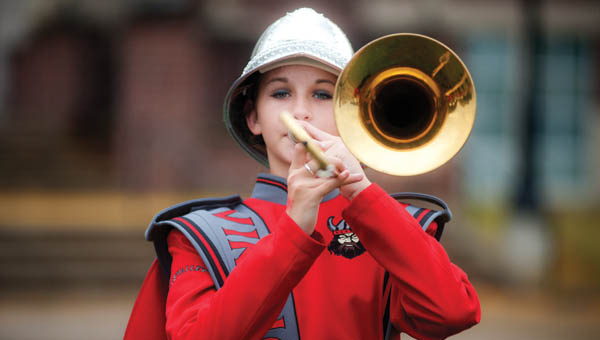 Grace Conley plays trombone while she and other members of the Symmes Valley High School Marching Band warm up for the annual Ironton High School Buckeye Classic Saturday.

The drizzle coming down on Saturday afternoon didn’t dampen the enthusiasm of the Ironton High School band guides as they waited for their duties to begin.

Starting at 5 p.m. was the 29th Buckeye Classic band competition that invited bands from southern Ohio and northeastern Kentucky that could send a band to the state competition in a few weeks. The guides were there to greet visiting bands.

Host band, IHS, performed for the crowd, but did not compete.

“It is a great way for people to come together,” Kalee Gannon, IHS field commander, said. “The band really works hard and we get to support other bands in our community.”

This Classic’s show by Ironton was a pop medley including songs like “House of the Rising Sun’ and “Uptown Funk.”

“It is the story of the myth,” Chaffins said. “We have a box of plagues.”

The band started working on the show back in the spring.

“The kids like telling a story,” he said. “It is very theatrical.”

Chaffins sees participating in the Classic as a way to get feedback on their performance.

“How to improve your show,” he said. “How to make it better.”

“They get to see what other groups are doing,” Jarvis said. “What is the art in the school.”

Each band performed for nine minutes before 12 judges.

“This gives the community the chance to see what other bands are like,” Savannah Bryant, Ironton High flag captain, said. “It is entertainment. It’s fun.”

But besides entertainment, being in band gives each member special support, she said.

“We are a tight-knit group of family,” she said. “When one of us goes through something, we all go through it together.”