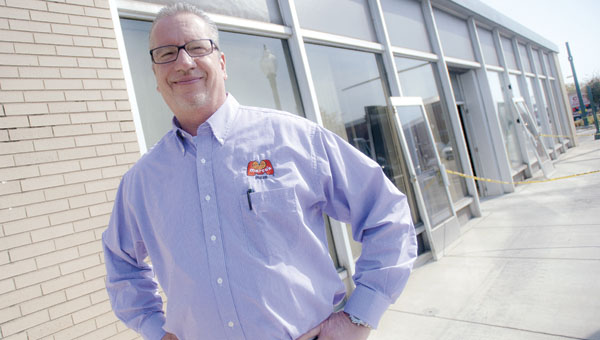 Mike Chapman will bring Marco’s Pizza to Ironton by mid-December. Chapman will be occupy half of the former AEP building located on South Third Street, across from Dollar General.

One of the fastest growing pizza restaurant chains is coming to Ironton.

Marco’s is expected to open at the former AEP building on Third Street by mid-December, according to owner and franchisee Mike Chapman.

Chapman is joint owner and partner with his wife, Bettie.

“I feel the Ironton community is underserved with quality pizza,” Chapman said. “Our claim to fame is authentic Italian pizza. Our meat toppings have no fillers. The cheese is a combination of three cheeses. The dough is made in the store daily and the sauce is made in the store. Our vegetables are cut daily. You put all those things together you have good quality pizza.”

This is the first store for the Chapmans in Ohio, who have two stores in Huntington and a franchise store in Hurricane, West Virginia.

Chapman discovered Marco’s when he was district manager for Wal-Mart with territory in Cincinnati.

“I would order Marco’s pizza and was amazed and loved it,” he said. “I read an article basically saying they were looking for franchisees.”

Chapman plans to add to the chain’s growth by opening six more stores in the area over the next three years.

“It is so very important for the downtown to get a representative of the fastest growing pizza chain in downtown Ironton near the end of the new bridge,” said Dr. Bill Dingus, executive director of the Lawrence Economic Development Corporation. “It brings opportunity and credibility to that area. Our goal of the LEDC is to start increasing the value of the downtown storefront properties and Marco’s is a tremendous accomplishment in that effort.”

Dumpsters available from 7 a.m.-7 p.m. COAL GROVE — The village of Coal Grove is offering a fall cleanup this... read more