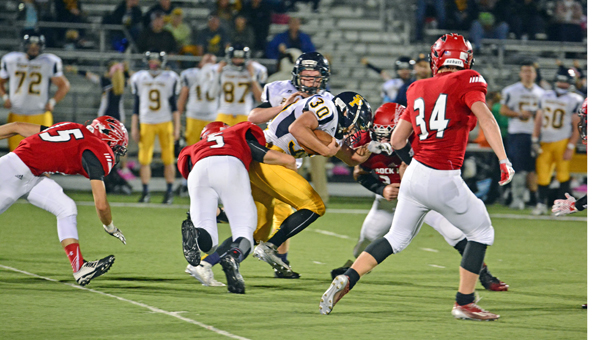 Rock Hill’s Nate Malone (5) makes the stop on South Point’s Williams Borders (30). The Redmen are looking to lock up a playoff berth with a win at Fairland on Friday. (Kent Sanborn of Southern Ohio Sports Photos)

Could we play with this foursome?

It looks as though the Ironton Fighting Tigers and Rock Hill Redmen should qualify for the Division V Region 17 football playoffs and the Symmes Valley Vikings appear to be in as well in the Division VII Region 25 postseason play.

The Chesapeake Panthers could make it a foursome with a win over the Coal Grove Hornets this Friday and might even qualify if Newark Catholic loses to Watkins Memorial.

Although nothing is set in granite, the playoff picture is shaping up as Ironton, Rock Hill and River Valley finishing in the final three spots.

River Valley will probably be sixth with a win against Shadyside but seventh or eighth with a loss.

Rock Hill has been helped by the open date when Fostoria St. Wendelin dropped football before the season started. The Redmen would probably have gotten only 3.5 points on the first level and no second level points. Instead, they are getting an average.

That would set up first round pairings between Ironton at Alexander, Rock Hill at Zane Trace and River Valley at Wheelersburg.

As of now, Ironton would be at Wheelersburg, Rock Hill at Zane Trace and River Valley at Alexander.

As for the Panthers, a win over Coal Grove would lock up a playoff berth. They may still qualify with a loss but there is a chance they could drop out of the top eight.

Chesapeake slipped to No. 7 in the region after its loss to Ironton last week. Fredericktown is No. 9 and Cardington-Lincoln No. 10. Both are 7-2 and play each other this week.

The Fredericktown-Cardington winner could jump ahead of Chesapeake if the Panthers lose.

Newark Catholic should qualify even with a loss to Watkins Memorial although there is an outside chance they could fall to ninth.

The Panthers (7-2) would play at Lucasville Valley is seventh, at Paint Valley if sixth and at Fort Frye if eighth.

Symmes Valley (6-3) is No. 6 this week in the region and plays at Northwest. The Vikings are virtually in the postseason unless they lose and certain teams get upset wins.

The Vikings can finish anywhere from No. 5 to No. 8. At fifth they would play at Harvest Prep, at No. 6 at Caldwell, at No. 7 at Trimble and at No. 8 at Danville.