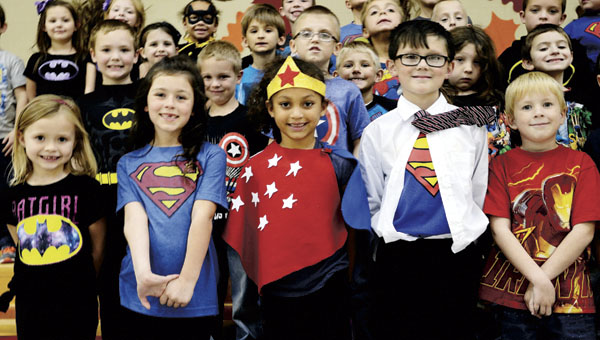 Students at Chesapeake Elementary wore superhero-themed clothing on Tuesday as part of Red Ribbon Week, a campaign to educate children on the dangers of substance abuse.

CHESAPEAKE — Chesapeake Elementary students were dressed like citizens of Metropolis and Gotham City on Tuesday.

The children and faculty at the school wore superhero-themed clothing as part of the school’s Red Ribbon Week.

The event, which kicked off Monday, is part of an effort to teach children about the dangers of substance abuse during Drug Awareness Week.

Each day, students dress up to coordinate with the day’s slogan.

On Monday, the theme was “I’m too bright to do drugs,” and students wore neon to go with the message.

On Tuesday, the numerous superheroes on campus reflected the day’s “Power to be drug free” slogan.

Students weren’t the only ones sporting superhero gear on Tuesday. Teachers could be found wearing Wonder Woman, Robin and Spider-man apparel.

Trisha Harris, the school’s principal, said students received stickers to go with the message, and were given themed lessons from their teachers.

“They’re just talking to the kids about the importance of staying drug-free,” she said

Harris said the daily themes were selected to have general appeal and to increase participation, which has been high.

Students are discouraged from wearing full costumes until Friday, when the event will culminate in a Halloween party in which students will be provided treats.

Red Ribbon Week is a nationwide effort, organized in 1985 by the National Family

Ironton will vote on utility plan

For the first time, this year Ironton residents will have the opportunity to vote on having their electricity and natural... read more