Buckeyes stay focused even with week off 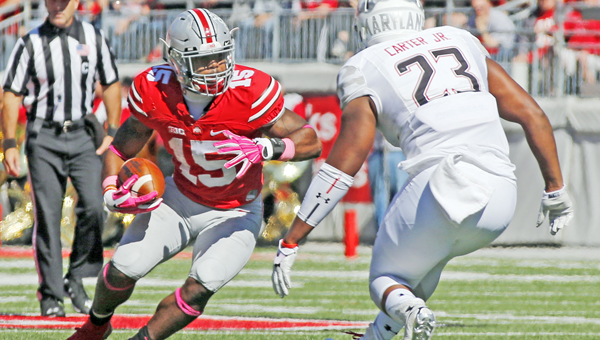 Ohio State running back Ezekiel Elliott (15) says the Buckeyes are staying focused even during this week’s bye in the schedule. (Barbara J. Perenic/Columbus Dispatch/TNS)

COLUMBUS (AP) — With an 8-0 record and No. 1 ranking, Ohio State has earned the right to exhale.

The Buckeyes routed Rutgers 49-7 on Saturday night and next play Nov. 7 against Minnesota. This week has been devoted to rest and recovery while maintaining sharpness. The Buckeyes practiced Tuesday through Thursday and will take the weekend off.

“We really haven’t backed off at all,” running back Ezekiel Elliott said. “I really think we’ve picked it up a bit, practicing a little harder than usual. We’re treating it like a normal game week. It’s very important to keep that momentum going.”

But the break is important in dealing with injuries. For example, linebacker Joshua Perry played against Rutgers on an ankle sprain from the previous game against Penn State.

“It wasn’t 100 percent,” he said, adding he expects it to be fully healed.

The secondary has lost safety Cam Burrows to a season-ending injury. Safety Erick Smith is out with a leg injury and cornerback Damon Webb has been suspended since Sept. 19 for violating school policy.

Among the receivers, Noah Brown and Corey Smith both broke legs and are done for the season while Parris Campbell, Johnnie Dixon and Dontre Wilson have been limited all season with lingering injuries.

“We still don’t have the depth at certain positions,” coach Urban Meyer said.

Also, defensive lineman Tommy Schutt missed the Rutgers game after surgery for a broken wrist. Meyer said it could be a couple of more weeks before Schutt returns.

The good news is that Elliott, who has rushed for 1,130 yards and 13 touchdowns, is healthy.

“Right now, I feel pretty good compared to how I felt this time last year,” he said.

The same could be said for quarterback J.T. Barrett. He was the starter last season and took a pounding. This season he was the backup to Cardale Jones until his first start against Rutgers.

“I can definitely say I’m not as beat up” as last season, he said. “The bye week gives everybody a chance to get back and get their body healthy and get back in the groove.”

Meyer feels the players are finally handling the pressure that comes with being national champion. The Buckeyes were winning games but not playing well, and critics wondered what was wrong. The past two games have been different.

“For a while there (pressure) was an issue,” he said. “I had to address it a few times. I really haven’t had to talk about it lately. I don’t feel they’re pressing.”

What Ohio State won’t be able to do this weekend is influence the College Football Playoff selection committee with its play before the first ranking is released Tuesday.

There’s a chance the Buckeyes won’t be among the top four qualifying spots because of its soft of schedule. Ohio State last season was 16th in the first poll but finished fourth and beat Alabama in a semifinal before defeating Oregon in the title game.

After games against unranked Minnesota and Illinois, the Buckeyes host No. 6 Michigan State on Nov. 21 and play at No. 15 Michigan a week later. Then there’s the possibility of facing No. 10 Iowa in the Big Ten championship game Dec. 5, the day before the final CFP ranking.

“It doesn’t really matter until the last poll comes, so what we have to do is keep improving,” Perry said. “We need to make sure the people are aware of the Buckeyes and what we can do. But at the end of the day, we’ve got to get one of those spots by what we do on the field.”

Until then he plans to dress up and go trick or treating this weekend.

“I was thinking Napoleon Dynamite,” he said.