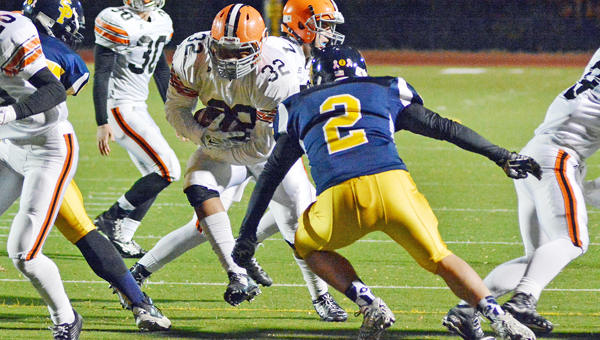 Ironton Fighting Tigers’ fullback Desmond Young (32) runs through a hole created by the offensive line during a 35-8 win on Friday. South Point’s Reed Murnahan braces to make the tackle. Murnahan won No. 2 in memory of Jacob Damron who would have been a senior this season with the Pointers but died in an auto accident. (Robert S. Stevens & The Gold Studio in Ironton)

The Ohio Valley Conference is strutting its stuff, at least this week.
Three area teams qualified for the Ohio High School Athletic Association postseason playoffs and all three are members of the OVC.
League champion Ironton squeezed in on the final night after winning its final six games to finish 6-4 and place eighth in Region 17 of Division V.
The Rock Hill Redmen had already locked up a Region 17 Division V playoff spot but went out and finished in style with a 42-16 win over Fairland in its final game to go 6-3 to place sixth.
The Chesapeake Panthers clinched their postseason berth with a 34-6 win over Coal Grove and finished sixth in Region 21 of Division VI.
Official results and pairings will be announced at 2 p.m. on Sunday by the OHSAA.
Ironton will probably play at No. 1 seed Wheelersburg on Friday in a rematch of week one. The Pirates (10-0) held on for a 14-6 win.
Ironton will begin ticket presale on Wednesday. Tickets are $6 each as set by the OHSAA.
Rock Hill should visit Albany Alexander who finished 9-1 with the Spartans only loss being 9-3 to Chesapeake. Rock Hill beat Chesapeake 27-20 in overtime.
Chesapeake (7-3) will be probably be at Lucasville Valley after Saturday’s game that saw Newark Catholic edge Watkins Memorial  22-20.
By virtue of the win, the Green Wave leap frogs from No. 9 to fifth and bumps the Panthers to seventh and send them to Lucasville (9-1).
Some upsets plus a loss created a disappointing finish for the Symmes Valley Vikings (6-4) who lost 21-0 at Northwest on Friday and thus dropped to ninth in Region 25 of Division VII and missed the postseason.
Even more disappointing for the Vikings is Sciotoville East finishing seventh and making the playoffs. The Vikings beat East convincingly 27-8 last week.