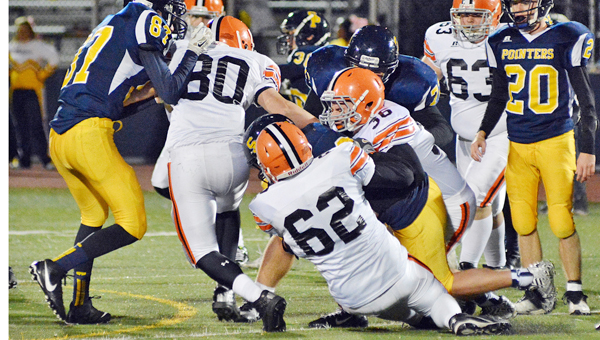 SOUTH POINT — Halloween is about trick or treat. The Ironton Fighting Tigers didn’t have a lot tricks and they took all the treats.

Ironton went to its passing game more to create a balanced attack as the Fighting Tigers racked up 389 total yards for an easy 35-8 win over the depleted South Point Pointers on Friday to win the Ohio Valley Conference outright.

“They were loading the box again and giving us some good looks in passing game. Our receivers ran good routes and our protection was pretty good and Jake (Isaac) threw the ball well.,” said Ironton coach Mark Vass.

“We needed to work on passing game. It was the same thing with Jake. He needed the work.”

After dropping its first four games, Ironton has now won six straight and qualified for the Division V Region 17 playoffs. The Fighting Tigers will play at Wheelersburg on Friday at 7 p.m.

“Any time you’re in a league you want to win it. It’s nice to go undefeated (in the league) and win it outright. That was a goal for us. We’re playing our best ball at end of the season and that’s what you’re hoping for. I’m proud of the kids and I’m happy for them,” said Vass.

The Fighting Tigers had 218 yards rushing with Andrew Barker getting 73 yards on 11 carries and Garrett Carrico adding 59 on eight tries. Isaac was 8-of-15 passing for 171 yards and three touchdowns.

Ironton drove to the 6-yard line to start the game but a fumbled snap led to a failed field goal attempt.

Ironton recovered a fumble at the 39-yard line and 12 plays later Desmond Young ran into the end zone from 4 yards out and it was 7-0.

Playing out of character, Ironton scored its next touchdown with a quick two-play drive — both passes.

Carey intercepted a pass two plays later and it took Ironton eight plays to travel 42 yards as Barker went 13 yards for the score an a 21-0 lead.

Ironton got the ball back with two minutes left in the half and went 54 yards in seven plays capped by a 41-yard scoring strike to Carey.

The Fighting Tigers went 90 yards in seven plays with Isaac hitting Willis in stride for a 54-yard scoring pass and a 35-0 lead.

“We came out the first half moving the ball pretty well. We executed pretty well. We had a few mistakes that cost us, but we took care of business overall and we got out pretty healthy,” said Vass.

South Point (2-8, 1-5) avoided the shutout after stopping an Ironton drive at the 9-yard line. The Pointers went 51 yards in nine plays with Brandin Jackson hiting Brandon Layne with a 45-yard scoring pass with 36 seconds to play. Jackson ran for the conversion.

Ironton held the Pointers to 121 total years — 86 coming against the second team including 60 of their 73 passing yards.

“The defense played well again. They were flying around throwing some licks,” said Vass. “As a unit they’ve been getting better all season. We’ve had some new guys play because of injuries and they’re getting some experience.”

Vass credited the seniors with the team’s turnaround after the rough start and all the injuries that have taken their toll.

“The seniors are a special group for me. The majority have been three-year starters. Some are hurt and out for the year and that’s unfortunate. But they kept us together and they made this season mean something,” said Vass.

Reed Murnahan ran nine times for 47 yards and Layne caught two passes for 50 yards to lead the Pointers. Jackson was 4-of-9 for 73 yards and two interceptions.