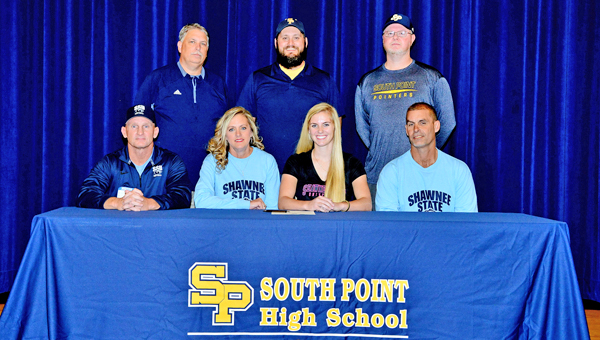 SOUTH POINT — Haley Rawlins is a senior at South Point High School and will be heading to college next fall.

But what she didn’t know is that her college recruiting started back in grade school.

First-year Shawnee State head softball coach Steve Whittaker has been following Rawlins’ career since she was 8 years old, partly because he coached her summer travel teams.

After seeing her and teammate Abbey Winkler play in a machine-pitch tournament, he began to coach his two daughters on travel ball teams the following year and remembered Rawlins and Winkler.

He got in touch with Haley’s father, Eric Rawlins, and began coaching her during the summer for seven years.

When the Shawnee State job opened last spring, Whittaker was hired and he still remembered Rawlins.

“The first person I thought about was Haley. The only senior on my team is the shortstop so it was a no-brainer. I know what she’s capable of doing. My daughter pitched against her in the regional tournament,” said Whittaker.

So Whittaker called Eric Rawlins and said he had a scholarship for his daughter.

“She’s just an all-around player. What can you say. She went from a two-hole, contact hitter in her younger years to where she’s a three-four-five hitter now because she hits the ball hard and she’s got power,” said Whittaker.

“She gets an ‘A’ defensively and an ‘A’ at the plate. She’s smart. She’s just the complete package. She’s a great kid. I’m lucky to get her. She could have gone a lot of other places. She’s the caliber I want here.”

It might have been easy for Whittaker to make the offer, but Rawlins had her own standards and requirements and Shawnee State had to fit those before she made a decision.

After sifting through numerous offers, she picked the Bears.

“I played for Steve for about seven years in travel ball and I liked the small size of the campus, it’s not far from home and they have my major which is nursing,” said Rawlins who likes the fit at Shawnee.

“I played with all the girls through ASA and all those years under Steve, so I’ve played with 90 percent of the team.”

Although Whittaker virtually guarantees Rawlins a four-year starting position, Rawlins talked as though that wasn’t an issue.

“I plan on going in an starting shortstop,” said Rawlins without flinching.

The South Point senior shortstop has definite goals that were shaped with the help of former South Point and Shawnee State player Erica Leighty.

“I want to do well in nursing. That’s number one. I’d like to set records and follow Erica Leighty’s footsteps at Shawnee.”

Lady Pointers’ coach Tanner Heaberlin is confident Rawlins will be an asset to the Shawnee program.

“I can’t imagine I’ll ever coach a better player. She’s a hard-worker, she’s dedicated, she’s a leader. She’s everything you want and more. I wish I had a hundred of her,” said Heaberlin.

Last season Rawlins went a stretch when she hit a home run in four straight games, thus placing her in a fourth place tie in the Ohio record books for most consecutive games with a home run.

“I tried not to think too much about it because I got a little superstitious.”

Haley is the daughter of Cheryl and Eric Rawlins of South Point.

Jim Walker jim.walker@irontontribune.com   McDERMOTT — Some things just aren’t meant to be. In this came, a lot of things... read more