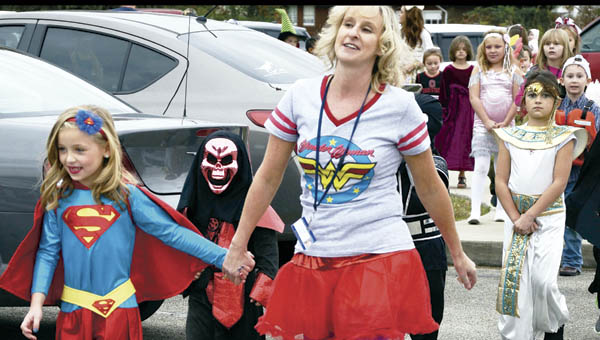 SOUTH POINT — Superheroes, princesses, Ninja Turtles and monsters could be found in abundance in Lawrence County’s schools on Friday.

South Point and Burlington elementaries hosted their annual Halloween parades in the afternoon and the cold, grey weather didn’t dampen the children’s spirits.

South Point students took to the streets for their parade, accompanied by the South Point High School marching band, who were also in costume, as well as cheerleaders and the flag corps.

The parade’s step off was led by the school’s six Star Students, who had received the honor for meeting stringent requirements in accelerated reading and attendance.

The top two students in the accelerated reading program of each of the school’s kindergarten through fifth grade classes received a ride on a fire truck, while the primary students of the month got a spot on the float sponsored by the Church of the Nazarene.

Members of the Shriners International also took part in the parade, with hillbilly-themed vehicles bringing up the march’s rear.

Over at Burlington, the school’s 400 students were led out in two processions around the school’s grounds, showing off their costumes for a crowd of parents and neighborhood residents.

Teachers and faculty were also dressed up, including the school’s assistant principal, Mike Clay, who was in full clown gear.

Following the parade, the students were led back inside, where they were treated to a Halloween party, Clay said.