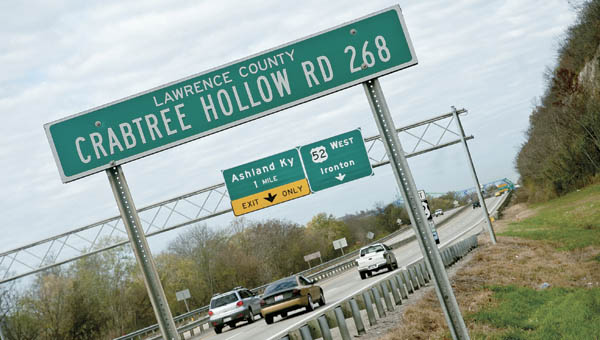 Motorists travel along westbound U.S. 52 mid morning on Wednesday. This January the Ohio Department of Transportation will take bids for the construction of barrier walls along the highway. The walls will keep future rockslides at bay.

SOUTH POINT — Work should start early next winter to cut down part of the hillside along U.S. 52 near the Ashland-Coal Grove bridges to stop a repeat of a boulder falling into the roadway.

In the early morning hours of April, a boulder landed in the westbound lanes of U.S. 52 near Crabtree Hollow Road. That forced the closure of all four lanes of the highway overnight and through the next morning so Ohio Department of Transportation crews could clear the lanes.

“Previous to that large boulder falling (cleaning out the hillside) was not on our top priority list,” said Kathleen Fuller, public information officer for ODOT District 9. “After that happened further inspection in the area moved it to the front of the list.”

The $6.8 million project will go out to bid in January with construction starting in March at the latest. Work will be at two different sites on U.S. 52: from the bridges to Crabtree Hollow and Crabtree Hollow to County Road 1.

At both locations, besides cleaning out rock, barriers walls with buttresses for support will be built.

“At Crabtree and County Road 1 there were more frequent occurrences of rock coming down,” Fuller said.

During the three to four months of work, traffic will be maintained in one lane in the westbound lane.

“If there are any periods of closure, it will be temporary and they will hold traffic,” Fuller said. “There will be no rerouting at all.”

SOUTH POINT — The two parcels pulled from the January foreclosure sale on property owned by Biomass are slated for... read more