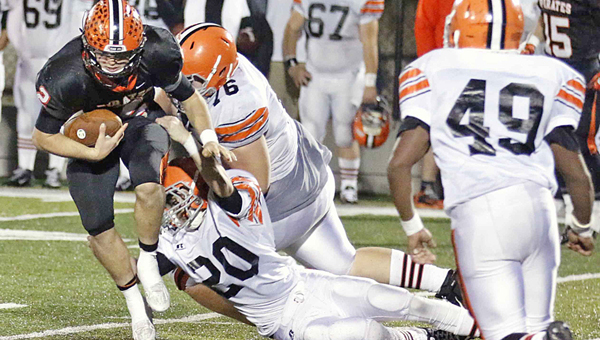 WHEELERSBURG — A few key plays early set the tone and turned the momentum against Ironton.

A turnover, a blown coverage and a fluke pass gave the Wheelersburg Pirates the early advantage as they went on to beat the Fighting Tigers 38-7 on Friday in the Division V Region 17 quarterfinals.

Wheelersburg had 130 yards rushing but only 62 of those yards were by the first team. However, quarterback Kyle Davis was 10-of-15 passing for 224 yards and two touchdowns as the Pirates got 354 total yards.

“I thought our front seven stopped the run for the most part. We just let them make too many big plays and first downs and just chunks throwing the ball,” said Ironton coach Mark Vass.

“I thought we had a lot of pressure on the quarterback for a while and he did a good job scrambling or just moving around in the pocket and throwing it knowing he’s going to get hit. He completed a lot of tough passes overall.”

Ironton (6-5) drove to the Wheelersburg 43 to start the game but turned the ball over on downs.

The Pirates went to the air on first down and Davis appeared to be going down for a huge loss but used a “fling and a prayer” to Tanner Holden who caught the jump ball for 18 yards to the Ironton 40.

Five plays later, Davis was bottled up at the line of scrimmage but began dancing side-to-side when he got loose and ran 10 yards for a touchdown and 7-0 lead at the 7:10 mark.

Ironton tried to answer by marching into Wheelersburg territory only to fumble the ball away.

The Pirates managed to get to the 9-yard line but a loss of 11 yards on a sack by Jaxson Pleasant forced Daylor Lewis to kick a 37-yard field goal.

The Pirates (11-0) first unit struggled all night to run the ball, thus forcing Davis to take to the air and he came through by completing 10-of-15 passes for 224 yards and two touchdowns with an interception.

“They stopped us that first drive and came down and scored and got some momentum. I just thought overall they made some plays and we didn’t,” said Vass.

“And give them credit. They outplayed us tonight. They’re a good ball club. I think they’ll make a run at it and make some noise in the playoffs.”

Davis hit Tanner Bivens with scoring passes of 50 yard and 22 yards — the latter with just 1:27 left in the half — as the Pirates built a 24-0 halftime lead.

Both teams had trouble moving the ball in the third quarter until the Pirates got the ball at their own 47 following a punt and used two big runs to score.

Xander Carmichael came off the bench to gain 18 yards and Dominic Reyes ran 33 yards for a touchdown with 1:56 left in the quarter for a 31-0 lead.

Ironton got on the scoreboard when Jake Isaac hit Travis Carey on a 33-yard touchdown pass with 6:27 left.

But Reyes returned the kickoff 65 yards to the 8-yard line and then he scored on the next play with 6:09 left to set the final score.

Ironton finished with 108 yards rushing and 71 passing for 179 total yards.

Garrett Carrico ran eight times for 37yards and Isaac was 3-of-9 for 46 yards and a touchdown. His lone interception came on a Hail Mary at the end of the first half.

Senior Lucas Campbell played defensive end despite having a torn ACL. Senior Desmond Young left the game early in the fourth quarter and spent the rest of the game and post-game vomiting.

Missing due to injuries were starters Levi Langdon, D’Angelo Palladino and Tanner Wilson.

Vass praised his team’s effort despite playing short-handed throughout the season.

Josh Morrison josh.morrison@irontontribune.com   ALBANY — In a game that featured contrasts from both teams offensively, it was the quick... read more