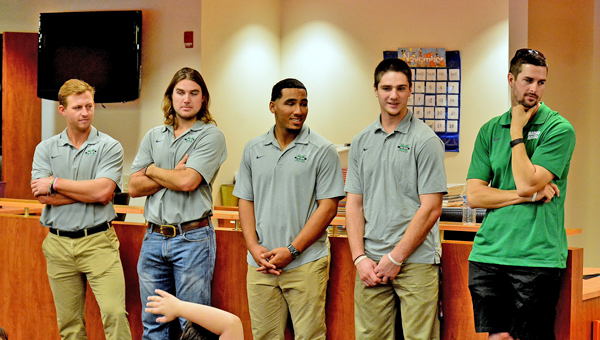 Josh Newman learned a lot as a pitcher for the Ohio State Buckeyes. But he said what he learned off the field has been the greatest lessons of his life.

Newman was drafted by the Cincinnati Reds but opted to complete his education and earn a degree. It was a sign of his priorities and what he had learned.

Newman got his degree and was then drafted by the Colorado Rockies. He pitched in parts of three seasons with the Rockies and Kansas City Royals. His stint with the Rockies earned him a National League pennant and a trip to the 2007 World Series.

With his professional baseball career behind him, Newman is now the pitching coach for the Marshall Thundering Herd. And Newman has brought another lesson with him that he learned at Ohio State, that of “Operation Pay Forward,” a program that stresses academics to students in the Tri-State area.

“First off, ‘Operation Pay Forward’ that we brought down from Ohio State speaks to kids today. The expectations they think that athletics doesn’t really involve being a student. In student-athlete, student comes first before athlete,” said Newman.

“We’re just promoting literacy, we’re promoting of getting an education, and our young men at Marshall are on board and promoting what we do and helping the Tri-State area for the youth to understand that education is first and foremost.

Newman brought that message to the Ironton Elementary School on Friday along with four members of the Thundering Herd baseball program.

“Having grown up in this area, I learned to do things the right way first in the classroom, then on the field and the community. All of my guys are great guys. These guys are four of the finest guys in our program,” said Newman.

Although the players come from different backgrounds and parts of the country, they agreed on the importance of education and the “Operation Pay Forward” program.

“As I matured, I began to respect my teachers and coaches because they are doing all they can to make you better. Put your trust and respect in them,” said junior infielder Aaron Bossi of St. Louis.

Sophomore Brandon Romero — a right-handed pitcher from Miami, Fla. — told the students to be strong with their character.

“Be yourself. I went to three high schools. I came to realize you need to be around good people,” said Romero.

Junior Heston Van Fleet — a pitcher from Kingsville, Texas —reflected on his grandparents who had a major influence on him and he related what he learned at a young age to the students.

“It was always stressed to me how important an education is, so I studied and worked hard,” said Van Fleet.

Freshman catcher San Finfer was simple and direct, “Be respectful and be a good student.”

Newman said his is both respectful and thankful to his experiences that have been made possible due to baseball and his education.

“For me, I’m so humble. There are so many people who helped me. I say that from the bottom of my heart. I would not be here today if I didn’t have people — coaches, teachers — I owed it to them who took time out to help me to be the best that I could be,” said Newman.

Newman admits his greatest playing moment a trip to Boston’s Fenway Park during the 2007 World Series even though the Rockies lost the Series.

“Then we go through the postseason without losing a game. Then we go to Fenway Park and run into (Red Sox pitcher) Josh Beckett. So the rest is history.”

Newman is proud of his accomplishments as a player, but he is more proud of his current position and bringing a message and ideals to not only the students of the Tri-State but to the Marshall baseball program.