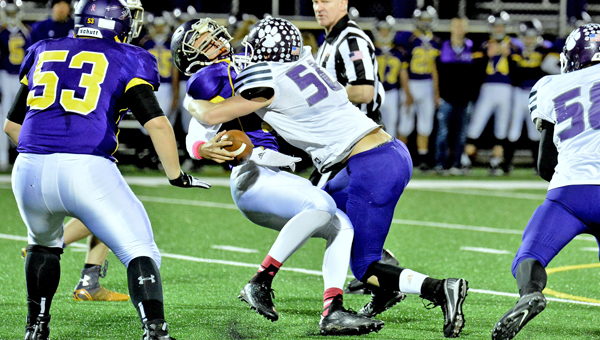 LUCASVILLE — Although purple was the main color of each team’s uniform, many of the players likely saw a lot of purple on their arms and legs after the Division VI Region 21 quarterfinal Saturday night.

In what was a very physical battle of two eight-win teams, in the end, it was the Valley Indians moving on with a 23-0 win over the Chesapeake Panthers.

Over the last several years, Valley has been known for its high-scoring offense, but it was the Indians going on long methodical drives throughout the contest.

It appeared Valley would strike quickly on their opening possession when Blake Howard sprang through a crease on the third play of the game covering 32 yards, but Chesapeake’s Ty Wilcoxon ran Howard down, stripped of the ball and ultimately recovered the fumble.

The Panthers (8-3) then marched 67 yards in 15 plays only to miss a 28-yard field goal after the drive bogged down.

The drive ate up over eight minutes off the first quarter clock. Not only did the Panthers fail to score, but they also lost leading rusher Maccoy Brown who was injured early in the drive and would not return.

Valley (9-1) then begin a long drive of its own by going 80 yards in 12 plays and resulted in a Blake Howard 19-yard run to put the Indians on the board.

The extra-point was no good and the score was 6-0 with 8:29 to go in the second quarter.

Howard finished the game with 156-yards on 20 carries.

After both teams traded punts, the Panthers fumbled and the Indians recovered and took over at the Chesapeake 30-yard line.

Valley moved inside the 10, but would be forced to settle for a Bryan Rolfe 22-yard field goal to take a 9-0 lead into halftime.

After forcing a Chesapeake three and out to begin the second half, the Indians extended their lead when Sam Basham capped a five-play, 52-yard drive with a 9-yard touchdown run.

Basham finished with 99 yards on 14 carries.

Chesapeake was forced to a punt again, but punter Will Scott took the snap, ran a fake to the right side only to be tackled one yard short of the first down.

Valley took over at its own 46-yard line and scored what would set the final score at 23-0 when Rolfe found Levi Whitt in the end zone for a 3-yard touchdown pass on fourth down.

Will Scott added 23 yards on nine carries for Chesapeake.