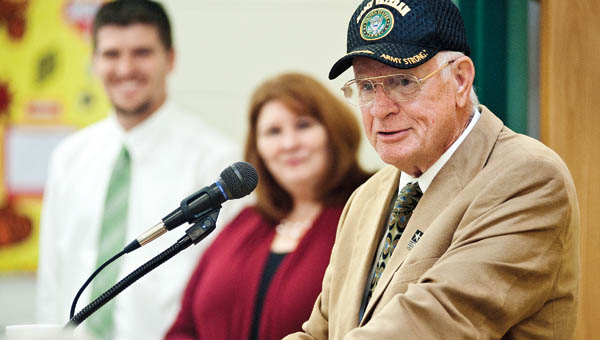 Local veterans were treated to the meal in the cafeteria, where they were led in prayer by social studies teacher Glenn Dillon and then enjoyed a musical performance from the school’s choir.

Members of the National Junior Honor Society led veterans to the cafeteria and brought them coffee as they waited for the event to begin, while the tables were decorated with placemats featuring messages from the school’s 8th grade students honoring them for their service.

The breakfast has taken place during Veterans Day week at the school since 1992, when it was started by Ireland Wiley, who was the school’s assistant principal at the time.

Wiley, who is a veteran himself, having been stationed at Fort Lewis in Washington state in the 1960s, said the breakfast was started during a renewed sense of appreciation for the military at the time. The nation had just gone through the Persian Gulf conflict a year prior.

He said for the first year of the event, they sent out invitations to as many local veterans as they could find. In time, as the event grew, veterans knew to just show up every year.

Aaron Lewis, the school’s current principal, said the event is “just to honor and show the respect we have for our veterans” and has always had a good response.

Lewis opened the event, which he says is “his favorite thing” the school does. He thanked those attending for their service, and paid respects to those who have passed since the tradition began.

Gary Simpson, of VFW Post 6878 in Proctorville, said he has been coming to the event since the beginning.

“I think it’s great the students honor the veterans,” he said, noting that it’s good to see the generation valuing military service.

Ronald and Tricia Carter, of Proctorville, were at the breakfast for their second year. Ronald Carter, like Wiley, was also stationed at Fort Lewis.

“I think it’s good that they honor the veterans for them here,” Tricia carter said.

There were Veterans Day display boards, created by students, in the school’s multipurpose room. In addition, Lewis said the honor society students at the school also designed stars for display in the building.

“If they know a veteran, they can decorate a star and honor them,” he said.

A ceremony, conducted by the Proctorville VFW to dedicate memorial benches at the school, is set for Monday at 10 a.m.

To a lot of people, video games are a waste of time. They don’t serve any purpose except to deteriorate... read more