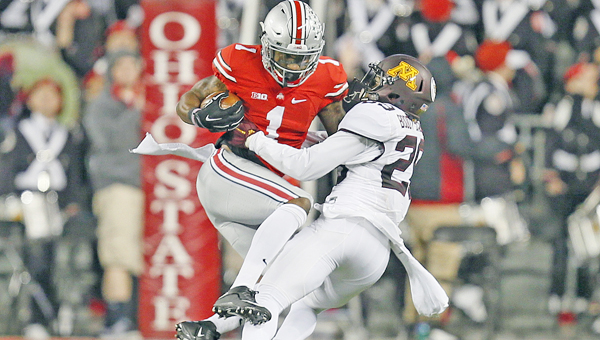 Ohio State wide receiver Braxton Miller (1) is taken down by Minnesota defensive back Briean Boddy-Calhoun (29), and gets injured in the process, in the fourth quarter at Ohio Stadium in Columbus, Ohio, on Saturday. The host Buckeyes won, 28-14. (Eamon Queeney/Columbus Dispatch/TNS)

COLUMBUS (AP) — The quarterback switch? Not so smooth. Everything else? Just good enough to keep Ohio State unbeaten.

And now, coach Urban Meyer has to decide whether to switch passers again.

Elliott ran for 114 yards — his 14th straight 100-yard game — and Vonn Bell returned an interception 16 yards for his first career touchdown for a 21-0 lead that held up despite the Gophers’ late surge.

The Buckeyes (9-0, 5-0 Big Ten) struggled to move the ball most of the game with Cardele Jones back at quarterback for one game because J.T. Barrett was suspended. Meyer said after the game that Barrett will return to practice next week and could get the job back.

“Offensively we were sloppy and not executing at a high level,” Meyer said. “It’s not what we expect. We expect to play better.”

Jones knows it. Asked for his assessment of the offense, he said: “Below average.”

Up next for the Buckeyes: A game at Illinois followed by the two teams from the state up north — No. 6 Michigan State and No. 16 Michigan.

Minnesota (4-5, 1-4) managed only 110 yards through three quarters before finally getting Mitch Leidner’s two TD passes, the last with 2:10 to go. The onside kick went out of bounds, and Jones ran 38 yards untouched off a fake handoff for a clinching touchdown, catching the Gophers off-guard.

“It was a grind,” Buckeyes linebacker Joshua Perry said. “Tough game. We thought they were going to run the ball on us, and they did some other things.”

The Gophers have dropped their last two under interim coach Tracy Claeys, hanging in there until the end against Michigan and Ohio State.

The Buckeyes’ latest quarterback switch ran into problems right away.

Jones completed Ohio State’s surge to the national title last season after Barrett got hurt against Michigan, and he kept the job for the first seven games this season. With the offense inconsistent, Meyer switched back to Barrett, who had three touchdown passes and two scoring runs in a 49-7 victory at Rutgers.

Barrett was cited for impaired driving during the Buckeyes’ off week, drawing a one-game suspension from the school. So Jones was back at quarterback Saturday, but he wasn’t effective throwing it. He went 12 of 22 for 187 yards with a touchdown, four sacks and a fumble at the Minnesota 21. He also ran 12 times for 65 yards.

Braxton Miller — the other quarterback on the Buckeye roster — took five snaps and ran each time. He also caught a 45-yard pass. His head hit the ground hard as he was tackled after the catch, and he had to be helped off the field.

Bell got Ohio State’s first score on a 16-yard interception return that initially was nullified by a targeting penalty. A review indicated there was no targeting and the score stood.

The Gophers played their second game since coach Jerry Kill retired Oct. 28 because of health issues. In the closing seconds against Michigan last week, Claeys decided to go for it instead of taking a tying field goal, and Leidner was stopped at the 1 to preserve the Wolverines’ 29-26 win.

Leidner made this one tight at the end, too.

Clemson jumps Ohio State to take No. 1 in AP poll