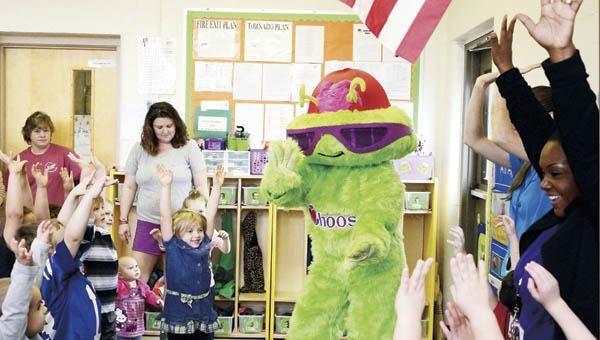 Students at Sybene Preschool dance with Choosy, a mascot who teaches them about healthy eating, as part of the center’s parent engagement event on Thursday.

SOUTH POINT — The first parent engagement event of the year was Thursday at Sybene preschool.

Parents listened to speaker Lorena Cahal, a family advocate for the center, who kept a group of parents up-to-date on events at the school and programs under way.

The Sybene school is a part of Lawrence County Early Childhood Academy, which has locations throughout the region, serving children ages 3 through 5.

Cahal said the center specializes in preparing children for kindergarten. This is done either in classrooms at the schools, or through an in-home program the school offers. In that program a teacher visits children and the parents in the home, making the transition to being away from family less jarring for new students.

Cahal introduced parents at the meeting to Choosy, an alien character, whose name stands for “Choose healthy options often and start young.”

Cahal described him as “a role model encouraging healthy decision making” who serves as the mascot for the preschool’s efforts to combat child obesity.

After the meeting, parents went into the classrooms, where they watched Choosy lead their children in a group dance, while they sang along to a song about healthy living and eating.

The preschool will hold three more parent engagements events during the school year.

Similar events are planned for the other Lawrence preschools in the coming weeks. One was Thursday evening at the preschool at the Collins Career Center, where parents also got a chance to make crafts after listening to a speaker.