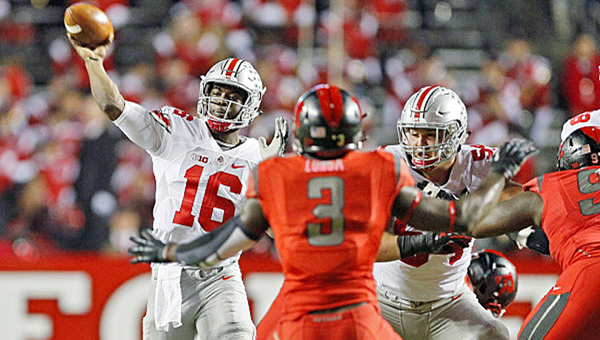 COLUMBUS (AP) — Urban Meyer spent the past two months saying that the Ohio State offense operates the same whether Cardale Jones or J.T. Barrett is the starting quarterback.

“I felt a little different (about it),” Meyer said. “Probably more so now as the season’s gone on than I did earlier in the year.”

He made the revelation after the No. 2 Buckeyes beat Minnesota 28-14 on Saturday, when Jones played for the suspended Barrett. Barrett was disciplined by the team for receiving a citation for driving while impaired on Oct. 31.

While Ohio State (9-0, 5-0 Big Ten, No. 3 CFP) totaled 376 yards, Jones did not shine. The Buckeyes scored only three offensive touchdowns, punted their first four possessions and were 2 for 4 in the red zone.

While it’s not easy to compare opponents, Barrett accounted for 324 running and passing yards and five touchdowns in a 49-7 win against Rutgers on Oct. 24 in his first start of the season.

He hasn’t yet made a second start. Barrett pleaded guilty Tuesday and was sentenced to a three-day driver intervention program and fined $400. His license was also suspended for six months.

Meyer said Monday that Barrett is expected to start Saturday at Illinois (5-4, 2-3).

Barrett excels with his run-pass threat off the read-option.

“I think the read game, that’s not a big part of Cardale’s game, which is kind of one of the parts of the foundation of the offense,” Meyer said.

Jones spends more time in the pocket and is not as quick as Barrett, although he did run 38 yards for a touchdown against Minnesota.

Barrett is more like former quarterback-turned hybrid back Braxton Miller in the way he gets around the edge and breaks long runs.

“J.T., as you look back, his history is of the more quick-hitting and a little more Braxton style,” Meyer said. “It’s just a much different style of offense, but we have the ability to do both.”

The Buckeyes have made it work with both guys so far.

“They’re going to be different with a better running quarterback, just as if Braxton were playing,” he said. “You always have to take that into perspective, the different attributes J.T. brings to the table.”

Because Jones was not as big a threat on the ground as Barrett, Minnesota dared him to test a proven secondary while focusing on stopping the passing game. The Golden Gophers had some success.

“(Barrett) gives you an added element of the double option in the offense and double option means, I’m reading someone either in a throw or in a run game,” Meyer said. “So, any time you have that, that gives you a cleaner defense because teams are not quite as aggressive.”

Another of Barrett’s qualities is his leadership. Despite the suspension, his teammates lobbied Meyer to keep him as a captain.

“He’s one of those leaders you can’t miss because he speaks with volume as much as his play,” safety Vonn Bell said. “He speaks what’s in his heart. He speaks what’s on his mind. He speaks for real. What he says, he says with authority. Everybody respects him.”