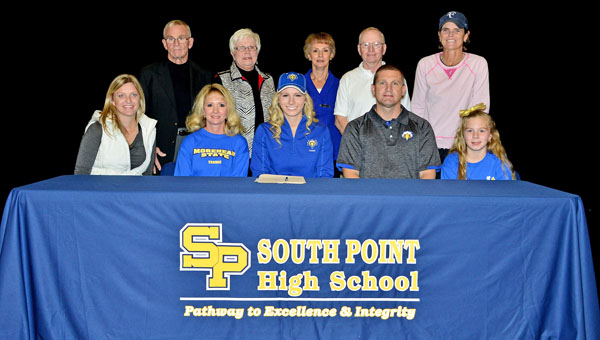 SOUTH POINT — Madison Riley wants her tennis career to soar, so becoming an Eagle at Morehead State gives her the best chance to spread her wings and fly.

The South Point Lady Pointers’ senior tennis standout opted for Morehead State over dozens of other schools who recruited her that included Eastern Illinois, Murray State and Missouri State.

“It was really close to home and I felt the program was really strong. I feel like I’ll grow a lot as a player and their academics are really good, too. I don’t know exactly what I want to major in, but their science programs are pretty good,” said Riley.

Her success in the high school tournaments as well as her club and AAU play caught the attention of Morehead State coach Kevin Fulton.

The Eagles were 11-10 last season against a tough schedule. Riley said the competition, the team and coaching all played into her decision.

“I feel like I had a pretty solid high school career, but I’m really excited to see my improvement when I get to college because I feel like I’ll have a lot more one-on-one with our coaches and I’ll have a team which I’ve never really had before so I feel like that’ll help me a lot,” said Riley.

Fulton signed some players who will arrive early in the spring but Riley will be the lone freshman joining the program next fall.

“I don’t know where I’ll fall in yet,” said Riley.

Although the competition gets tougher and she’ll be in an entirely different situation than high school, Riley is looking forward to the challenge.

Riley began playing tennis when she was 9 years old but she didn’t start playing tournament tennis until the following year.

“I was trying to figure out a sport I enjoyed. My mom had me try basketball and tumbling. I just really liked tennis,” said Riley.

Besides tennis, Riley also plays on the golf team and runs track. Riley said she uses golf as a stress relief.

“Golf is something I do just to take my mind off tennis. If I’m having a stressful week, I go play golf. It just calms me. And I just love running track,” said Riley.

Madison is the daughter of Kim and Eric Riley of South Point.