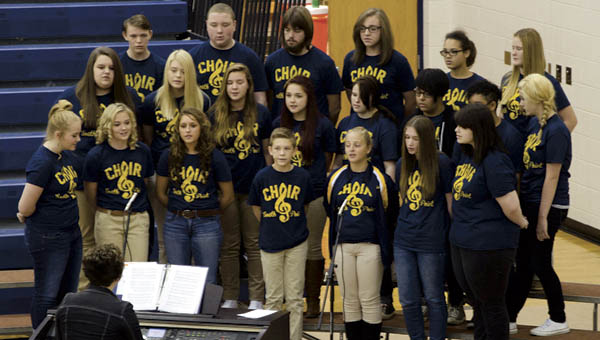 South Point High’s choir sings “My America” at a Veterans Day program at the school on Wednesday.

SOUTH POINT — A group of history honors students at South Point High led the school in saluting the area’s veterans on Wednesday.

Local veterans and their families were invited to campus, where they were given a presentation and treated to a meal.

The event, organized by the history students, was conducted in the school’s gymnasium before the student body.

The veterans and their families filed in, received an ovation and took the floor in front of the crowd, who were gathered in the bleachers.

Following the Pledge of Allegiance and a performance of the Star Spangled Banner by Erica Yates, a prayer and a poem were read, while the history and significance of Veterans Day was explained by the honors students, who hosted and organized the event, along with their teacher Kent Stewart.

The veterans were then treated to a performance of “My America” from the school’s chorus, before the keynote speaker, Douglas Joe Freeman, who served as hospital corpsman in the Marines and was honorably discharged in 1992, took the stage.

“Being a veteran is part of something bigger than you,” Freeman told the crowd.

He spoke of the risks of life in the armed forces.

“The military often have to make split second decisions that could result in them being tried for murder or being flown home in a pine box.”

But he said the risks far outweigh the benefits of service.

“Serving your country comes with pros and cons, but having served is something you can be forever proud of.”

After the event, the honors students served a meal to the veterans and their families.

Following Freeman’s remarks, a video presentation was played, showing the history of the holiday, as well as tributes to South Point alumni and community members who served or lost their lives in combat.

The program closed with Haven Young performing “Travelin’ Soldier,” a song written by Bruce Robison and popularized by the Dixie Chicks, while images of South Point area veterans played on the screen.

Following the event, the veterans were served a meal by Stewart and the students.

Karah Davis, president of the school’s history club, said it was important to honor service members.

“Some of them didn’t have a choice whether to serve,” she said. “It’s scary to think of going into fighting so that we could have our freedom. They protect us.”

“Veterans Day is important so they get the recognition they deserve for putting their lives on the line for us,” she said.

Young said that the event, as well as the song she sang, was significant for her.

“It means something because my brother was in the service,” she said. “I feel like if something had happened to him, my world would have collapsed.”