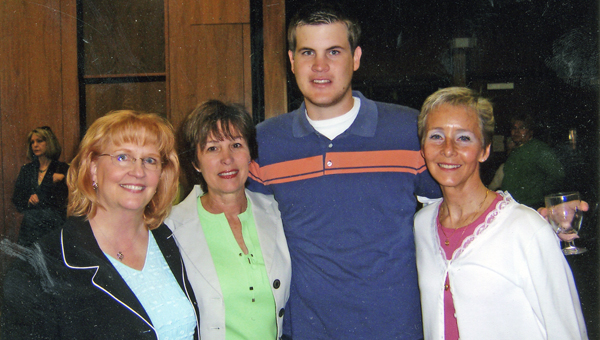 Meeting at the “We Are Marshall” movie post-Memorial Fountain party are, from left to right, former Marshall cheerleader Ann Harvey, Lucianne Kautz Call who is the daughter of athletic director Charlie Kautz who died in the plane crash, Jamie Lindon who was one of the movie’s writers, and cheerleader Debbie Chambers whose parents also died in the crash. (Photo Submitted)

As far as history is concerned, the Marshall football team plane crash was 45 years ago.

For those people touched by the greatest sports tragedy ever, it sometimes seems like it was only 45 minutes ago.

It was Nov. 14, 1970, when the Thundering Herd football team was returning to Tri-State Airport following a tough loss at East Carolina. At 6:38 p.m., Southern Airlines Flight 932 left Kinston, N.C. and reached the local airport at 7:23 p.m.

There was a steady rain and weather conditions were poor. It is believed that either an improper use of cockpit instrument data or an altimetry system error caused the plane to come in too low and clipped the top of some trees and hit the hillside.

There were 75 players, coaches, administrators, team staff and boosters on board. All died.

Ann Harvey was a freshman cheerleader from St. Albans. There was no room for the varsity cheerleaders on the plane so they were left behind. The rule among the cheerleaders was “if everyone can’t go, no one goes.”

That bond saved her life and her fellow cheerleaders, but it did not spare them the emotional pain and suffering they experienced then and continue to feel even until this day.

The annual memorial service was held on Saturday and Harvey — who now lives in Ironton — attended along with her husband Steve Harvey who is not only the pastor at Sharon Baptist Church but he is also the Marshall team chaplain.

Ann Harvey sat down this week and recalled the events on campus leading up to the tragedy and how the Marshall students and community turned to each other to deal in order to cope with this never ending sting.

On Thursday, there was an intramural football game between the Black United Students and the Kappa Alpha fraternity. KA’s flag was a Confederate flag and there was a cannon in the front yard of the fraternity house. Their spring dance was called “Old South.

It lit a fire and it began to smolder.

There was a stabbing after the game and the next day there was tension in the dorms.

“It was very scary,” said Harvey. “There were a couple of fights in the cafeteria between black girls and white girls and black guys and white guys.

“We had a couple of black girls on our floor and we were all really close, but they kept their distance and we kept ours. Then on Saturday the exact same thing happened. It was just scary.”

Saturday night there was a dance at Mad Anthony Wayne. Harvey was part of a double date.

“We all listened to the game on the radio and we lost and everybody was upset. When we left the dorm that night, it was like you could cut the tension with a knife. When we left Twin Towers nobody was talking.”

“I remember Gary was with Vicki and Bill was driving. Gary said, ‘Hey, why don’t we go meet the team?’ And Bill said, “No, Marcel (Lajterman) will be at the dance. We’ll just talk to him there. He was going to announce his engagement at the dance. He was the kicker. Mary Alice Cooke was his girlfriend.

“We get to the dance, and when you get to a college dance, the band’s playing and people are hooping and hollering. It was dead silence. The band wasn’t playing. Everyone was standing around and we’re like, ‘What’s going on?’ And somebody said, ‘We heard there was a plane crash and they think it’s the football team.’ And we were like ‘Nah,’ and if it was it probably wasn’t bad.”

But 20 minutes later a member of the band announced it was indeed the Marshall plane and there were no survivors.

“You talk about mass hysteria. People were screaming, crying. It was horrible. Obviously, everyone left in dead silence,” said Harvey.

Bev Preston would be one of Harvey’s roommates the next year and her father was the team dentist and her parents were both killed in the crash. They arrived back at the Twin Towers dormitory to find that fire lit by racial tension had been extinguished by the tears of sorrow.

“When we left the dorm (for the dance), nobody was talking. When we got back to the dorm, everybody was hugging everyone. Black and white, it did not matter anymore. It was unbelievable the difference. Everybody was talking to each other and were loving on each other. There was nothing else you could do.”

In the dorm, no one had phones during that era. However, there was a payphone in the hall across from Harvey’s room.

At 2 a.m. the phone rang and Harvey answered it. The voice on the other end was a young female calling from Tuscaloosa, Alabama.

“There were a lot of guys on the football team from Tuscaloosa. She was crying and she asked, ‘was my brother on that plane?’”

Harvey asked her for her brother’s name but Ann did not know the player. She told the young girl to call back the next day and that someone could give her the information.

“It ended up he was a freshman and he wasn’t on the plane,” said Harvey noting that freshman were not eligible to play on the varsity during that era.

“I didn’t know this until years later when my brother told me that when it came on TV that the Marshall plane had crashed and it was the football team, my neighbors all started coming into my mom’s house (in St. Albans). When it was announced the cheerleaders weren’t on the plane, everyone left, sad but relieved I wasn’t on the plane.

“I called (my mother) later that night about midnight — the lines were all busy and it was hard to make a call — and obviously she knew I was OK.”

The weather that day matched the tragedy. It rained all day and being November the temperatures made for a horrible day in all ways.

But through the midst a light shined on Harvey and the other students.

“It was November and I had been on campus since August and I had walked by the campus Christian Center every day and said, ‘I need to go in there,’ but I never did.

“That night there was going to be a service at 11 o’clock. In the rain, no coats, no umbrellas, we all walked down there and didn’t even feel the rain. We were all numb. We got there just in time that we got to sit on the very back row. There were so many people there who standing all the way around and even standing outside. They just opened up the doors. Fr. Scott — he was the team chaplain — he didn’t get to go because of a prior commitment. He did the service and it was just amazing. There wasn’t a dry eye in the place.”

The next day and the rest of the year there were no race issues. “It all just went away,” said Harvey. “We were all Marshall green!”

There we no counselors during that time period and there were so many hysterical people that school officials just brought mattresses from the dorms into Gullickson Hall and nurses gave shots of valium to sedate people.

The ordeal remained emotional and intense the following week as well.

Harvey said she had a Monday, Wednesday and Friday class every morning at 8 a.m. and the students sat at tables in alphabetical order. Six members of the football team had been students in the class of 24 and their seats sat empty.

There was no school the next week, but the following week there was supposed to be a test.

“We figured we’d still have the test. Dr. Terko was a big, burly guy. He looked at those six empty seats and he looked at me on the back row with three empty seats and another student and said, ‘would you like to move?’ I don’t think I did. I don’t remember. Within two minutes, he started crying and he said, ‘Class dismissed. We’ll meet again Wednesday.’”

Harvey recalled the loss of two players — Roger Childers who had been married only one week earlier and Allen Skeens who were both from St. Albans just like her.

“Allen and I grew up going to church together. Allen was one of the people who wasn’t identified,” she said.

“So we asked Roger, how does Pam (his wife) feel about you going to the football game? They’d only been married a week, but he had had a brain tumor and was a football player who had surgery the year before and could no longer play. The right side of his face was still somewhat paralyzed.

“He said, ‘Pam knows how much I love football and she’s given me the A-OK to go. They let him go as a manager. (Roger and Allen) were teasing me and Cheri because we weren’t going to go.”

Skeens’ death was hard, but the memorial service was crushing for Harvey.

“The most traumatic thing in my whole life was walking into Memorial Field House when they had a service for those six guys and I knew all six of them,” she said.

“There was a spray of yellow flowers in the middle and three caskets on either side. Barry Nash was one of 11 children. His little brother was running up to the caskets asking, ‘Barry, are you in there?’ Barry is that you?’ It was unbelievable emotionally. Those three caskets on each side left an impression.”

Today, Harvey said the crash still stirs emotions. She said that the movie “We Are Marshall” has helped ease some of the pain not only for her but for many others who were close to the tragedy.

“I still get chocked up sometimes. It seems surreal almost. The movie was really good and kind of therapeutic for everybody. I know Lucianne called Roger Vanover’s mom and she wouldn’t go. We tried to get hold of Beverly Preston — she was one of my roommates — she’s lives in California now and she’s never been back to Huntington since she moved there.

“It’s still just hard to believe. You see all these healthy, strong, normal college guys and all of the sudden they are gone.”

For Harvey, faith has been the greatest tool that got her through that ordeal as well as other hardships even today.

She reflected on the example of her mother who remained strong when Ann’s father died at the age of 52 and she was just 12 years old.

“When my dad died, because of my mom and the faith that she showed, I lived on my faith. Everyone either turned to God or drugs and alcohol. I know a lot of people who became drug addicts and alcoholics as a result of that (Crash). They couldn’t handle it.

“That has helped me have a lot of faith as a younger person and as an adult. God will get you through anything. It still hurts real bad, but you know everything is going to be OK. It is because of that I’m the strong person that I am.”

Ann Harvey has had to remain strong for the past 45 years. When it comes to the Marshall plane crash, time continues to stand still.