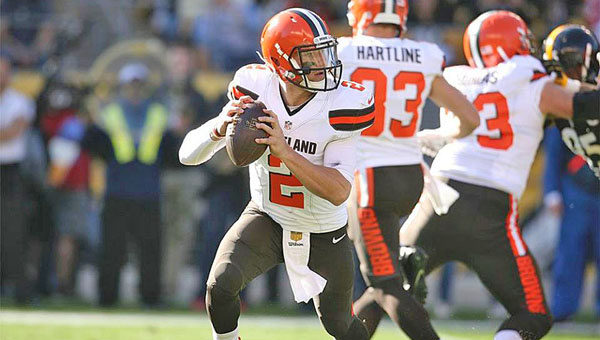 Cleveland Browns’ quarterback Johnny Manziel rolls out against the Pittsburgh Steelers’ defense during Sunday’s game. Manziel was 33-of-45 for 372 yards and a touchdown but the Browns lost their fifth straight game, 30-9. (Photo Courtesy of The Cleveland Browns.com)

PITTSBURGH (AP) — Maybe Johnny Football can ball in the NFL.

Johnny Manziel passed for a career-high 372 yards with a touchdown and an interception in a 30-9 loss to the Pittsburgh Steelers on Sunday.

The 2012 Heisman Trophy winner endured six sacks, a facemask that nearly turned his head 180 degrees and some questionable play calling to put in the most promising performance of his turbulent pro career.

“I don’t want to say that it was positive, after a game like this, but at least I learned a little bit today,” Manziel said.

The lessons came in a fifth straight loss for Cleveland. The Browns (2-8) head into their bye week losers of five straight and are 2-13 in their past 15 games under head coach Mike Pettine.

Not exactly what owner Jimmy Haslam had in mind after a promising 7-4 start to Pettine’s tenure.

Though Haslam told a group of reporters afterward no changes were imminent, Pettine is well aware that something needs to be done.

“Where we are right now isn’t good enough,” Pettine said. “We’re challenged as a staff to do a little soul searching, come up with some answers and make sure when we come out of this break, we’re ready to go and ready to snap this streak.”

One will continue for another year at least: Ben Roethlisberger’s mastery over the Browns. The Steelers quarterback came off the bench to take over for injured starter Landry Jones, throwing for 379 yards and three scores to improve to 19-2 against Cleveland, including an unbeaten mark at Heinz Field.

“Ben is Ben,” Pittsburgh wide receiver Martavis Bryant said. “So once he got in the game, he does what No. 7 do.”

Antonio Brown caught 10 passes for 139 yards and two scores as the Steelers (6-4) remained perfect at home against Cleveland since 2003. The Browns did their best to help, rushing for just 15 yards and committing 11 penalties for 159 yards.

“I just feel like we are not playing a well-rounded game right now,” Browns linebacker Paul Kruger said. “We have to find how what we are good at, then focus on it until we are great at it.”

The best thing Cleveland might have going for it is Manziel, who has struggled with consistency on the field and maturity off it.

Pressed into the fifth start of his career with Josh McCown sidelined by a rib injury, Manziel looked dangerous and resilient by continuing to step up in the pocket in the face of near relentless pressure by the Steelers.

Save for a fumble on Cleveland’s first play when the ball seemed to slip out of his hands and a late pick that came after some curious play selection, Manziel was solid.

He endured a nasty facemask from Pittsburgh linebacker Arthur Moats, who twisted Manziel’s head awkwardly while reaching out for the quarterback in the second quarter.

Manziel didn’t miss a play and later nearly scored a touchdown in the third quarter when he flashed the ability to ad-lib that served him so well during his electric career at Texas A&M, slipping out of the grasp of a Pittsburgh defender and snaking his way to the goal line.

Officials initially ruled it a score, but the call was overturned on review. Cleveland then managed to turn a first-and-goal from the 1 into a fourth-and-goal from the 7 that ended with Manziel being picked off by Mike Mitchell.

“I was just trying to make a play for these guys,” Manziel said. “They fight for me until the end, and I’m going to do the same thing for them.”

Late in the game, Manziel lofted a pretty 7-yard touchdown to Gary Barnidge. Of course, the Browns being the Browns, Travis Coons missed the extra point. Still, Manziel turned the Steelers into believers after they spent three-plus hours breathlessly chasing him.

“Heck of an athlete, heck of a nice arm,” Pittsburgh linebacker Lawrence Timmons said. “He has all the intangibles that might make him a great quarterback one day.”

NOTES: Cleveland WR Andrew Hawkins was taken to the University of Pittsburgh Medical Center for observation after sustaining his second concussion in three games. … The Browns host Baltimore on Nov. 30. … Cleveland CB Justin Gilbert was healthy but inactive. Pettine said the team sat Gilbert to give Charles Gaines more reps. … The Browns are 6-28 against Pittsburgh since re-entering the league in 1999. … Travis Benjamin led Cleveland with seven receptions for 113 yards.