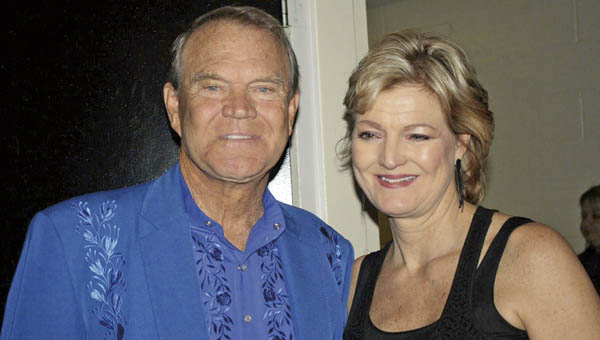 Debby Campbell with her father, country music legend Glen Campbell, in this photo. She has written a book, “Glen Campbell: Life With My Father,” which details their relationship over the years and the aftermath of his 2011 diagnosis with Alzheimer’s Disease.

Daughter of Glen Campbell details story of relationship with father

When Debby Campbell learned her father, legendary country musician Glen Campbell, had been diagnosed with Alzheimer’s Disease, she said there was much she was unprepared for.

Glen Campbell, 79, a country Music Hall of Fame member, known for hits such as “Rhinestone Cowboy,” “Wichita Lineman” and “By the Time I Get to Phoenix” and his three-year variety show on CBS, was diagnosed with the disease in 2011.

In the aftermath, Debby Campbell has written a book, “Glen Campbell: Life with My Father” in 2014, detailing her relationship with the entertainer.

“It’s just a lot of feelings about everything,” she said. “ Everything I’ve been through, trying to have a relationship with my dad. It’s been a struggle through his four marriages and trying to intermingle different siblings. It’s a wonderful story of how I wanted to be in my dad’s life, and I succeeded, but with the Alzheimer’s Disease, it ended.”

Campbell is one of eight siblings from her father’s marriages. She toured as a backup singer with him from 1987 to 2011.

“I am very blessed,” she said. “Dad and I had an awesome relationship. We did everything together.”

She said she wanted to write the book to chronicle her efforts to build a strong relationship with her father, and the aftermath of his diagnosis.

“The book is not about dad, and it’s not about me,” she said. “It’s about our relationship and how we came to have it.”

She said it was struggle to build that connection, having to deal with the complications of a mixed family, fans and the industry.

“Everybody wants a piece of you when you’re a celebrity,” she said.

The book, her first, was released first in Europe by Omnibus Press, followed by publication in the United States in 2014.

“I’m not a writer by any means,” she said. “It was more of a journaling experience. I’ve been told it’s like sitting and sipping wine and sharing.”

Following Glen Campbell’s announcement of his diagnosis, accolades for his career poured in, including a Lifetime Achievement Award at the Grammys in 2012. His 2011 album “Ghost on the Canvas,” intended to be his last studio work, featured an array of big-name collaborators, including Billy Corgan of the Smashing Pumpkins, Paul Westerberg of The Replacements and Robert Pollard of Guided by Voices.

“I think that was long overdue,” she said. “Dad’s a phenomenal entertainer.”

However, she said she had “mixed feelings” about the acclaim at the end of her father’s career.

“It’s sad that they give you your due in your final years, and not while you’re in your prime,” she said.

Following his announcement, Glen Campbell embarked on a “Goodbye Tour” of the U.S., Canada and the United Kingdom, playing more than 100 dates.

When asked if pulling off the tour was something her father felt driven to do, given his diagnosis, she said, “No,” citing his feelings of obligation to those around him.

“Personally, I don’t think so,” she said. “Dad had wanted to retire for a long time, but he kept saying, “I can’t. I have a band. I have a family. They have families.”

She said the work of the road was eased somewhat by having family members present on the tour.

“But he really wanted to be home,” she said.

Glen Campbell, now in the advanced stages of the disease, was the subject of the acclaimed 2014 documentary “I’ll Be Me,” which chronicled his battle with the disease and the undertaking of the tour.

ROME TOWNSHIP — A shingles and pneumonia vaccine clinic is set for Thursday at the Wyngate at RiversEdge. The clinic, which... read more