‘Before The League’ airs on OUS-TV tonight 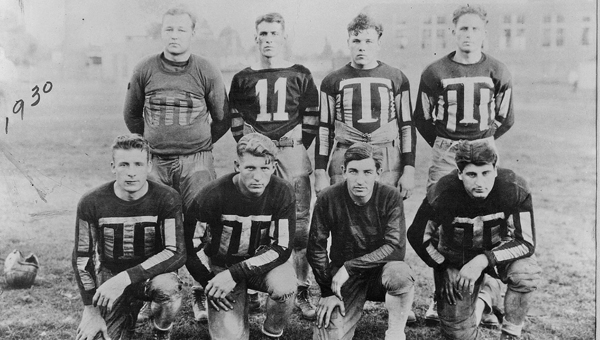 Members of the 1930 Ironton Tanks semi-professional football team backfield including Glenn Presnell (front row second from left). The Tanks will be featured in the documentary “Before The League” Tuesday and Wednesday on Ohio University Southern TV Channel 25.

The NFL is celebrating its 95th season this year and Time Warner SportsChannel will help with the festivities by the airing of the six-part documentary “Before The League” that will air Tuesday and Wednesday.

The documentary will air locally on the Ohio University Southern television channel 25 thanks to the joint efforts of Time Warner Vice President and General Manager of Time Warner Cable SportsChannel Jason Pheister and OUS director of electronic media Don Moore.

The documentary will air on TWC SportsChannel 311 outside the Ironton area and across the state.

“If you’re a football fan, there is no better way to celebrate the history of professional football than seeing ‘Before The League,’” said Pheister who is the co-executive producer of the documentary.

Pheister drew on his experiences from working in the Tri-State area to help with his contributions to the projects.

“This project was the product of a lot of hard work by a lot of people,” said Pheister.

The documentary was produced for Time Warner Cable SportsChannel in partnership with independent producers and artists and support from the Pro Football Hall of Fame.

“Before the League” examines how small towns like Portsmouth and Ironton were the blueprint for fielding early pro football teams as well as fostering healthy rivalries.

The documentary includes never before filmed memorabilia and photos from historians.

“The media attention has been tremendous throughout the state,” said Pheister.

Pheister is a Marshall University undergraduate with a master’s in business administration from Ohio University. He previously worked at WSAZ-TV and WOWK-TV.

Pheister also worked at the director of programming and product development for ONN/WBNS-TV in Columbus. His primary focus was the creation of digital media and news, sports and lifestyles programming for cable networks, on-demand products and online channels.

He worked with Lee Enterprises who had properties that included WSAZ-TV, the Lincoln Journal Star, Quad City Times and the Wisconsin State Journal.

The viewing schedule is:

Football was born in America in the late 1800s, evolving from a hybrid of soccer and rugby through a series of adaptations introduced on the field by college and working class men.

Opportunity gives way to exploitation as ringers flooded the sport, eager to make their mark and their fortune. Company teams like the Columbus Panhandles and the original Green Bay Packers were created to support local industry.

From the beginning, money and competition led to historic scandals with player jumping and accusations of cheating. Brutality on the field must be halted.

The power of celebrity to bring fans, attention and money to early football is seen with the addition of Olympic powerhouse Jim Thorpe to the Canton Bulldogs. While rule changes help grow the sport.

The end of the sandlot era and the promise of increased revenue through expansion directly threatens the small town team originally at the core of football’s identify. Small town teams like Portsmouth Spartans, Ironton Tanks and Dayton Triangles can’t compare with the success of the Green Bay Packers.

See the preview of the documentary here. Video credit: Before the League

Before The League from Time Warner Cable SportsChannel on Vimeo.

CINCINNATI (AP) — It figures that Cincinnati’s first loss would come against a team that has tormented them in the... read more