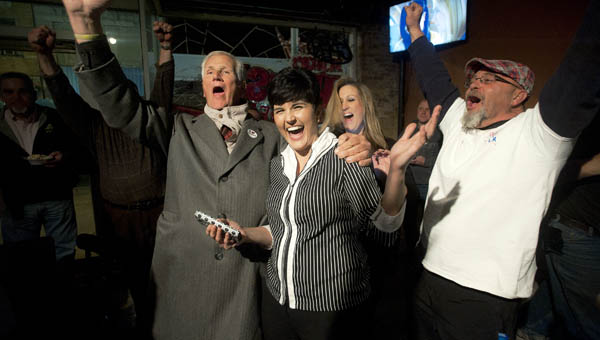 Ironton resident Katrina Keith is on top of the world surrounded by friends and family after winning the Ironton mayoral runoff election on Tuesday. Keith beat out running mate Bob Cleary by more than 70 percent of the vote.

Tuesday’s runoff election showed with emphasis what voters had said the first time around. Katrina Keith is the one they want as their next Ironton mayor.

“We are elated,” Keith said. “I can’t put it into words right now.”

As her supporters deafeningly cheered her at her celebratory party, Keith laid out what she expects to accomplish.

Then Ironton city’s benefits specialist Keith missed the charter-requisite 40 percent vote by less than 5 percent to have taken the race outright that night.

That meant a runoff was mandatory two weeks after the first election that saw Keith and former mayor and current councilman Bob Cleary take the top two places. Then Keith pulled 1,145 to Cleary’s 730.  Also running were John David Willis with 670 votes and James Tordiff with 563.

This was the second runoff in the history of the Ironton City Charter that went into effect in 1980 changing Ironton’s government from city manager to mayoral. That year Walter Kesteron and William Sheridan were in the city’s first runoff. In the first race Kesteron was the top vote getter, but the runoff changed that with Sheridan declared the final winner.

Keith supporters packed the Ro-Na Theater just as the polls closed. Cleary stayed at his Fourth Street home with family.

Voting was steady at the two polling locations — the City Center and VFW Post 8850 — with candidates camped out at one or the other.

With five hours left before the polls closed Cleary, who was with his wife, at the parking lot of the VFW, said if the turnout was 1,000 at each locations, his chances at winning were good.

By 2 p.m. 600 had voted at each site, according to Lawrence County Board of Elections member Mark McCown.

“The turnout is good,” Cleary said. “We feel like we would be happy with 1,000 at each place. It shows interest and that the voters are getting out and selecting. If you have a low turnout, it can be anyone’s time.”

A few feet away from Cleary were Keith supporters holding up signs in her support.

Deb Hagerty started campaigning for Keith at the VFW at 8 a.m.

“There are a lot of toots (from cars) and lots of thumbs up,” she said.

Keith got to her place across from the City Center by 7 a.m.

“It was already busy that early,” she said. “The energy here is tremendous. It has been across the board. Young. Old. Male. Female. We have started an excitement among the people.”

That energy moved to the Ro-Na as Keith laid out her agenda when she takes office on Dec. 1 focusing first on downtown revitalization.

“We have to clean up this city,” she said.

Things that go bump in the night