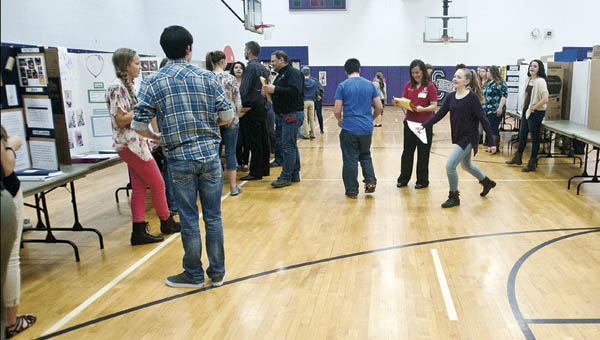 More than 80 students from the sixth, seventh and eighth grades at the school took part, where they displayed their projects and presented the findings of their experiments.

The students had been worked on their projects since the beginning of the school year and on Wednesday presented them to a panel of judges from the community, many who work in the scientific field, Greta Lewis, an eight grade science teacher who coordinated the fair, said.

Sixth grade students are required to take part, while seventh and eighth grade participation is voluntary, she said.

The students are rated on the project’s creativity, use of the scientific method (consisting of a hypothesis, experiment and analysis), how data was recorded, the display of the information and an oral presentation to the judges.

“I saw them in my dad’s cupholder in the car and got the idea,” he said.

He tested six substances. His hypothesis was that vinegar would do the job best, which turned out to be correct.

Leah Kitchen, of the sixth grade, did her experiment around cookies, which she baked from scratch.

She baked two sets, one of which was served fresh, and another put in the refrigerator.

She hypothesized that the refrigerator batch would be more popular. After testing this on 15 people, she was proven correct.

The containers housed an egg and her experiment was to see which material best protected it when dropped.

Her findings were that the container made of cotton balls did the job best.

Tristin Fry, of the seventh grade, used this year’s project to expand on his earlier experiment.

This year, he took the top result of that project and broke it down into two types of truss bridges, a deck and throughout truss.

His findings were that the deck truss he built could hold 130 pounds, while the throughout truss came in at 56 pounds.

Lewis said taking part in the science fair is a good educational opportunity for students.

“It benefits them in everyday life,” she said. “They use the scientific method to solve everyday problems.”

About 35 students will be selected to take part in the county fair in February. Winners from that event will go on to the district fair in March and the state science fair on May, Lewis said.