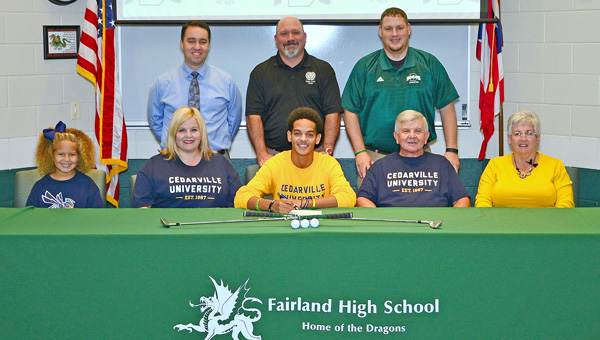 PROCTORVILLE — When Hayden James decided to focus on golf, his future came into focus as well.

The Fairland Dragons’ senior has played football, basketball, baseball and golf until this year when he dropped football to focus on golf.

By focusing on golf, James improved his game and landed a scholarship to play for the Cedarville University Yellowjackets.

“(By focusing on golf) I was able to have more time to practice and put more effort into my game that ultimately got me a chance to play golf at the collegiate level,” said James.

“In past years it hurt me that I had to play football and go to two practices. It affected where I was good in both areas. I feel as if I was great in golf because I was able to practice solely on golf and that’s the reason why I was able to get the scholarship.”

“Hayden put in a lot of hours, especially the last few years. Being a three-sport player it’s especially tough on golf, He realized golf was his ticket and he gave up football this year to concentrate on golf and it helped him tremendously,” said Ward.

“The big thing with Hayden is his potential. Hayden’s got a big cap. The ceiling is really high. He’s only really worked mainly at golf for one year. Once he gets in college where he’s working year-round on it he’s got a really high ceiling.”

James is excited to see how he improves once he scraps all sports in college and focuses all his energy on golf.

“My hopes are that it improves an extreme amount because I’m going to be working year-round and not just on the mechanics of the game but fitness and I’ve got to make sure continuing the good work in the classroom,” said James.

James selected Cedarville over several other schools that included Miles College in Alabama, Stephenson College, Defiance College, Heidleberg University and Mount Union among the many suitors.

“I think Cedarville is the right fit for me with the religious aspects, the academics, the athletics, so overall I think was the prefect choice for me and I’m looking forward to it,” said James.

James was All-Ohio Valley Conference the past two years, he won four tournaments over the past summer, he was named to the Ironton Invitational All-Tournament team, and reached the Division II district tournament this season.

James began playing golf in the seventh grade and credited his grandfather Ron James for introducing him to golf.

“The seventh grade is when Fairland began offering golf and then it just became more and more serious. I saw it gave me a good opportunity to go to college and I think my best opportunity and that’s why I chose to play golf,” said James.

“(Ron James) started me with the game and he’s been working with me ever since. I’ve had numerous coaches and swing coaches. Coach Ward and Phil Butcher — he’s my swing coach — and he’s got me to where I am now and I wouldn’t be here now without them.”

James plans to major in either athletic training or kinesiology.

Hayden is the son of Summer James.

COLUMBUS (AP) — Joey Bosa’s highlight reel for No. 2 Ohio State could be affectionately titled “Three Men and a... read more