Spartans use defense to stun Buckeyes 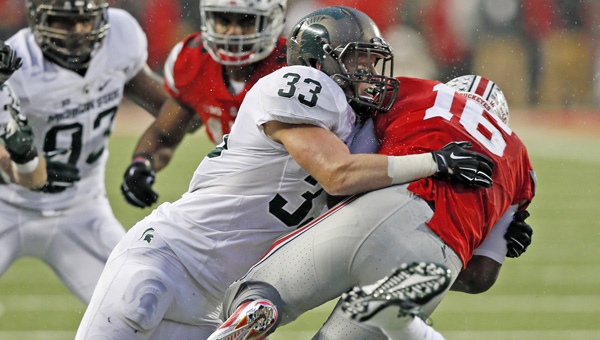 COLUMBUS (AP) — The last place Michael Geiger, all 5-foot-8 and 185 pounds of him, wanted to end up was at the bottom of a pile of Michigan State football players.

The junior kicker booted through a 41-yard field goal as time expired and then sprinted away from a swarm of celebrating Spartans on Saturday after No. 9 Michigan State upset No. 2 Ohio State 17-14 to snap the Buckeyes’ 23-game winning streak.

Geiger remembered what happened the last time Michigan State won a huge game on the final play of regulation.

“I didn’t want to pull a Jalen Watts-Jackson,” Geiger said, referring to his teammate who ended up with a broken hip after returning a botched punt for a touchdown to beat Michigan in October. “I was trying to stay on my feet as long as possible.”

Playing without injured star quarterback Connor Cook on a rainy and windy day at Ohio Stadium, the Spartans (10-1, 6-1 Big Ten) took control of the Big Ten East, barged into the thick of the College Football Playoff hunt and very likely ended Ohio State’s chances to repeat as national champs.

“We know how to win,” coach Mark Dantonio said.

The Spartans certainly do. With a victory next week at home against Penn State they will clinch a spot in the Big Ten championship game. The last time Michigan State beat Ohio State was the 2013 Big Ten championship game and that broke a 24-game winning streak by the Buckeyes and kept them out of the BCS title game. This time they put Ohio State’s playoff hopes in critical condition and left behind a team in Columbus that seems to have been playoff or bust.

After the game junior tailback Ezekiel Elliott questioned the play calling and said this would be his last home game as a Buckeye.

“I mean there’s no chance of me coming back next year. I got to make the most of my time left,” Elliott said.

Ohio State plays at Michigan next week. As far as the postseason goes, it’s likely the best the Buckeyes will be able to do is the Rose Bowl.

Ohio State (10-1, 6-1) managed just 132 yards against a rugged Spartans defense and lost for the first time to a Big Ten team in the regular season since Urban Meyer became coach four seasons ago.

The Spartans completed one pass in the second half, but they gave Geiger a chance to win it with 3 seconds left and he curved it through.

The Buckeyes started the season as the unanimous No. 1 team in the country, an overwhelming favorite to win another national title. They had more quarterbacks then they knew what to do with, one of the best running backs in the country and a defense with potential All-Americans at every level. Ohio State sputtered some through 10 games but was never really challenged. At least not like this.

The Spartans relish the role of underdog like no powerhouse program in the country and it seemed to fuel them in the Horseshoe. They were 13-point underdogs coming into the game and you probably could have gotten another touchdown from the odds makers when Michigan State took the field for its first drive without Cook.

“The one thing that made a difference … this game we got to be the chaser,” Dantonio said. “So we could chase this game, so we could play with emotion.”

Cook took a shot to the shoulder last week against Maryland. Michigan State gave no hints as to whether he would play but when he warmed up cautiously before the game it was obvious something was up.

Without Cook, the Spartans used both backups. Tyler O’Connor started and Damion Terry played, too.

Terry took a hard sack by Sam Hubbard and fumbled late in the first quarter. The Buckeyes recovered at the Michigan State 32 and it led to Elliott’s 1-yard touchdown on fourth-and-goal.

Elliot had a string of 15 straight 100-yard rushing games snapped. The Heisman contender ran for 33 yards on 12 carries.

O’Connor responded with a 75-yard scoring drive, hitting Trevon Pendleton for a 9-yard touchdown to tie the score.

It looked as if each team was waiting for the other to make a mistake, and Michigan State did just that.

Macgarrett Kings muffed a punt and Terry McLaurin recovered at the Spartans 6. J.T. Barrett threw pass to Jalin Marshall on the next play and made it 14-7 Ohio State with 3:33 left in the third quarter.

The Spartans turned into an option/quarterback run team. They leaned on an offensive line that was supposed to be a strength this season, but has endured numerous injuries and has started six different lineups.

The Spartans marched 75 yards on 13 plays, with no completed passes but a helpful offside on Ohio State, and Gerald Holmes reached the ball over the goal line for a 2-yard touchdown to tie it at 14 with 12:03 left.

Ohio State never had an answer.