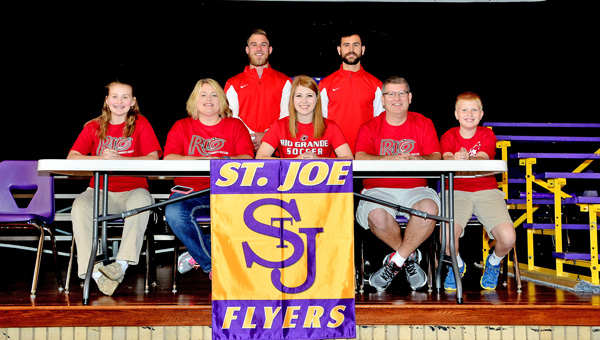 Emma Saxby has become one of the best female soccer players in the area. And she has the boys’ team in part to thank for it.

The St. Joseph Female Flyers’ senior standout was a three-year starter for the girls’ team after playing on the boys’ team as a freshman.

St. Joseph didn’t start a girls’ team until her sophomore year, but she said playing on the boys’ team proved valuable.

“It definitely made me tougher. Girls are harder to play with than the boys. They’re meaner,” said Saxby.

Meaner and tough-tested, Saxby honed her game and earned the attention of the University of Rio Grande. On Friday she signed a letter-of-intent to play for the Lady RedStorm.

“I’ve been going to Rio Grande for soccer camp in the summer since I was a sophomore and I always really like the environment and their coaching staff and it kind of felt like home there more so than the other schools did.”

“I talked Otterbein and Capital a lot when I was seriously figuring out where I wanted to go,” said Saxby. “You want to look for a school that has a good record so you can improve and maybe go somewhere with it.”

Playing since she was six-years-old, Saxby started playing club ball in the eighth grade and “that’s when I got really serious.”

Saxby scored 41 goals and had 33 assists in her three seasons on the girls’ team. She was second team on the Southeast District Soccer Coaches’ All-Star Team her sophomore and junior years and first team this past season.

Rio Grande — the 2014 league champion — won four of its final five games and reached the semifinals of the Kentucky Intercollegiate Athletic Conference tournament. The RedStorm will lose five seniors from this year’s team.

“I talked to the (Rio) coach and he said he had a position for me up top and he said that I could hopefully score some goals,” said Saxby.

“She came to a camp at Rio in the summer. She’s a great player. She’s going to bring a lot to Rio not only on the field but off the field as well. I believe when she comes in she’ll be a starter for the Rio’s women team. Most of the freshmen that we have come in and go straight to the (starting) team and I believe she’ll be one of those.”

A member of the National Honor Society, Saxby plans to major in business.

Emma is the daughter of Dr. Richard and Lisa Saxby of Ironton.