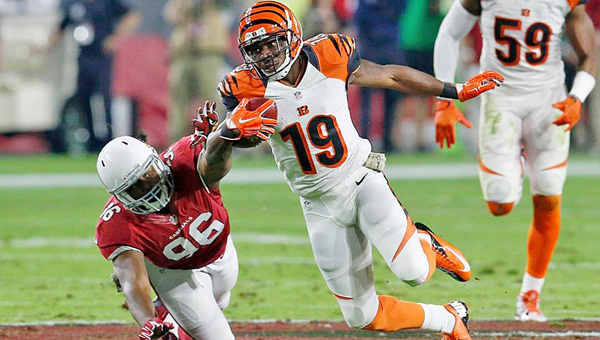 Cincinnati Bengals’ wide receiver Brandon Tate (19) runs for yardage after the catch during Sunday’s nights game against the Arizona Cardinals. The Bengals fell 34-31 for their second straight loss. (Photo Courtesy of The Cincinnati Bengals.com)

GLENDALE, Ariz. (AP) — The matchup between two of the best in the NFL lived up to the hype — with a bizarre twist at the end for good measure.

Chandler Catanzaro kicked a 32-yard field goal with 2 seconds remaining and the Arizona Cardinals escaped with a 34-31 victory over the Cincinnati Bengals on Sunday night.

The winning field goal was from considerably closer range than it would have been because Cincinnati’s Domata Peko was called for unsportsmanlike conduct for hollering out offensive signals to try to confuse the Cardinals (8-2) as they were about to spike the ball to set up the kick.

“I don’t think I have ever seen that call, ever since I have been in the NFL,” Peko said. “We had way too many penalties today. That was the name of the game. We were fighting the refs and the Cardinals. ‘’

“It’s kind of ridiculous,” he said.

The Bengals were penalized 10 times for 108 yards, Arizona seven times for 40.

Carson Palmer overcame two early interceptions to throw four touchdown passes and, with 57 seconds left, completed three quick passes to move the team into field goal range after the Bengals rallied to tie it at 31.

“I just made two really stupid plays,” Palmer said. “Just kind of got the jitters out and we got rolling. We caught fire in the second half.”

Palmer, who had said during the week that this one against his former team was “not just another game,” completed 20 of 31 passes for 317 yards and has 11 TD passes in his last three games — four against Cleveland, three against Seattle and four against Cincinnati.

Dalton bounced back from a shaky start to the second half to engineer the Bengals’ comeback. He finished 22 of 39 for 315 yards.

“We were kind of out of sync in the first half trying to force a few things,” Arizona coach Bruce Arians said. “We were running it OK, but the passing game was not there. Big thing was the defense got off the field. We got the ball and got some good momentum going. The big play to J.J. was a catalyst.”

Arizona had the ball at its 16 with 58 seconds to go and Palmer quickly threw 19 yards to Nelson. He followed with passes of 18 and 20 yards to Larry Fitzgerald to move the ball to the Cincinnati 27.

The Cardinals were trying to spike the ball because they were out of timeouts when the referees blew their whistles and announced the penalty against Peko.

While Dalton started the second half with six straight incompletions, Palmer moved Arizona to three third-quarter touchdowns on three possessions.

First, Palmer threw deep to the speedy Nelson who caught it at about the 10 and scored, a 64-yard play that tied it at 14.

Cincinnati went three and out, and Arizona went 66 yards in eight plays, Palmer throwing 18 yards to John Brown for the score to give the Cardinals their first lead of the night, 21-14, with 5:32 left in the half.

Passes of 11 yards to Fitzgerald and 14 to Nelson set up Palmer’s 16-yard scoring pass to David Johnson and Arizona opened a 28-14 lead after three quarters.

Dalton had his heroics, too.

Notes: Bengals cornerback Darqueze Dennard left the game with a shoulder injury in the first half. … Arizona defensive tackle Frostee Rucker left early in the fourth quarter with an ankle injury. … Arizona cornerback Patrick Peterson left the game late with an ankle injury. … The only times this season the Cardinals haven’t scored at least points came in their two losses.

Jim Naveau jnaveau@civitasmedia.com   COLUMBUS – Nobody at Ohio State was happy after Michigan State’s 17-14 win over the Buckeyes... read more