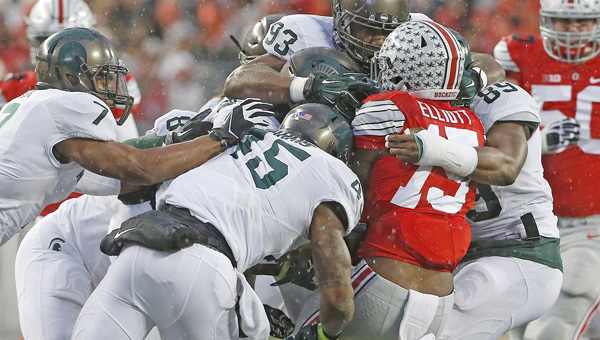 COLUMBUS (AP) — Ohio State running back Ezekiel Elliott apologized for the critical comments he made about play calling after the Michigan State game and says it was the wrong time to make it known he would not be returning to school next season.

Elliott posted a long apology on Twitter on Monday saying, “My intentions were not to point fingers at anyone for OUR failures. I was caught up in emotions. I hope everyone can understand how strongly I love this team and this university and how much I wanted to win that game but I do not regret anything I said.”

Buckeyes coach Urban Meyer says Elliott will not be disciplined and that he agreed that star junior should have carried the ball more in Saturday’s loss.

Meyer says he wished Elliott’s comments would have been made in private instead of during a postgame interview, but that Elliott came to him and apologized.

“Zeke has always been a very emotional competitor,” Meyer said. He added that Elliott has been good student and a loyal and selfless member of the team.

“It’s sealed, as far as our team and the team room is concerned in the locker room,” he said. “That kid you’re talking about, he’s one of my favorite of all times. He’s good to go. And we’re going to do our best to get ready to play this week.”

No. 8 Ohio State tries to bounce back from his first loss in more than a year at No. 12 Michigan on Saturday.

Meyer said he will be more involved in decision-making this week that is normally handled by offensive coordinator Ed Warinner and quarterbacks coach Tim Beck.

Elliott had 12 carries in the Buckeyes’ 17-14 loss at home to Michigan State on Saturday. Elliott, who spent a few days in the hospital that week for a staph infection, said he lobbied Meyer for more touches and he did not believe the coaches gave the players the best chance to be successful.

“I think he said what a lot of people were scared to say,” Ohio State defensive end Joey Bosa told reporters Monday.

“He said what was in his heart. It may have been wrong, it was in the moment, but he felt like it was what he needed to say,” Bosa said. “I’m not saying I feel the same way, or we feel the same way. It’s just said and done and we haven’t really talked about it at all.”

Elliott also said that Saturday’s game was his last at home with the Buckeyes and that he would not return to Ohio State for his senior season. That was no surprise, but it was startling that he made that proclamation in that setting.

“I don’t care if I rushed for 20 yards or 200 yards but I just wanted to win that game,” Elliott wrote. “I agree that it was the wrong time and place to say I was going to leave after this year.”

Elliott has run for 1,458 yards this season after gaining 1,878 last year and leading Ohio State to a national championship.

Elliott says he knew a month ago that this was going to be his last season in college.

“Finally I just want Buckeye Nation to know I am sorry for all the controversy and unrest I caused in the past couple days,” he wrote. “But I promise you all will get a focused and prepared team this Saturday when we travel to Ann Arbor. GO BUCKS!”

Linebacker Raekwon McMillan said Elliott has the support of his teammates.

“He spoke his mind after the game,” he said. “For three years Zeke has done nothing but good for this program. For everybody to change their mindset about Zeke based off a couple of comments would be crazy.”

Center Jacoby Boren said playing the Wolverines is more important than Elliott’s comments and that the loss to Michigan State doesn’t change anything.

“It’s ‘The Game.’ That’s what you come to Ohio State for is to play in this game,” he said.

CINCINNATI (AP) — The Bengals got home shortly before sunrise and watched a little video of their latest loss, one... read more