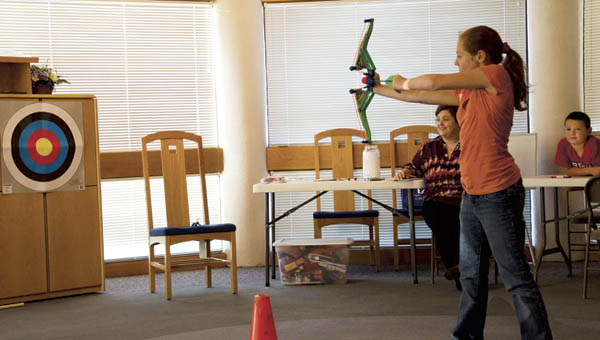 Teens and tweens take part in the Hunger Games Arena Challenge at the South Point branch of the Briggs Lawrence County Public Library on Monday.

SOUTH POINT — The odds were in their favor Monday afternoon.

A number teens and tweens, ranging in age from 8 to 17, took part in the Hunger Games Arena Challenge at the South Point branch of the Briggs Lawrence County Public Library.

The event was organized by the library system’s teen program and was held as a tie-in to this month’s opening of the final film in the Hunger Games saga.

Participants had to run through an obstacle course in the library’s “training center,” where they shot at an archery target, as well as attempt several physical challenges.

Following that was the “Cornacopia challenge,” based on a scene in the book and film, where a number of items were placed in the floor and participants had to rush in and gather them.

Following this, a story was read, in which point values were assigned to the various items. After the event, prizes were awarded to winner and the youth were treated to snacks.

Jan Gullett, the library assistant who hosted the challenge, said the event is a good way to get teens and tweens to come in and sample the libraries offerings.

“It also allows them a chance to socialize and to meet kids they wouldn’t encounter otherwise,” she said.

Movie-themed tie-ins are a regular part of the library’s programs, Gullett said. Similar events have been scheduled in the past for films based on Stephenie Meyer’s “Twilight” series.

In addition to teen activities, the libraries in the county have activities for all ages planned for the coming month.

All branches are hosting an ongoing movie trivia challenge, while a coloring contest is open to children.

Family movies are scheduled to play at the libraries in coming weeks, such as “Minions” and “Ant Man.” And Briggsy’s Block Party, a Lego-themed program is set for several branches.

Many branches will also host a visit from Santa, which always gets a high turnout from families, Gullett said. Saint Nick is scheduled to be at South Point on Dec. 7, Chesapeake on Dec. 8, Symmes Valley on Dec. 9 and Ironton on Dec. 14. All events will take place at 6 p.m.

Those seeking more information can contact their local library branch.

The City Welfare Mission will continue its longstanding tradition of a free Thanksgiving dinner on Thursday. Volunteers will start on... read more