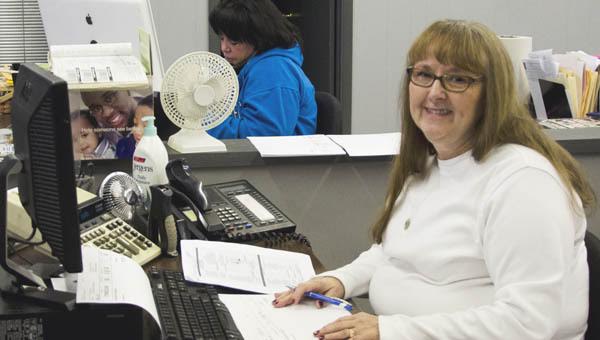 Debbie Milem, who has served in customer service and as the circulation clerk for The Tribune for the past 13 years retires.

A familiar face to The Tribune customers has moved on.

Debbie Milem, who has served in customer service and as the circulation clerk for the paper for the past 13 years, begins her retirement today.

Milem came to the paper after working at the Corbin Ltd. Clothing factory in Ironton. She had not worked at a newspaper before, but had no problem adapting to customer service.

As the person who answers the phone for the paper, she was the first person to receive questions and complaints.

“I’m just naturally nice, so I had no problems,” she said.

Her duties also included selling subscriptions, as well newspapers sales to customers who drop by the front desk.

Josh Morrison, the general manager and circulation director for The Tribune, said Milem has been an integral part of the team at the paper for over a decade.

“She is typically one of the first people you see, or the voice you hear when you come in or call in to our office,” he said. “Debbie, along with our other front office staff, has developed a close relationship with many of our customers over the years, as many of them are on a first name basis.”

Morrison said he was fortunate to work closely with her in the circulation department for several years, and that she showed him the basics of the circulation systems when he started inside with The Tribune in 2006.

“She will always be remembered here for her dedication and customer service approach,” he said. “Debbie always made sure things were done the right way, and customers came first.”

He praised her versatility and said, while Milem was classified as a clerk in the circulation department, her work went far beyond that, jumping to wherever she was needed to make sure the job got done.

“She helped with many of the business and accounting aspects of our operation that will be hard to replace,” he said.

Milem said things she will miss most are the people she worked with and the customers. She most looks forward to spending time with her husband, Quincy, and her family.

She already has plans for her life after The Tribune.

Five ordinances were given readings at Ironton City Council’s Thanksgiving week meeting on Monday. First readings were given of: •... read more