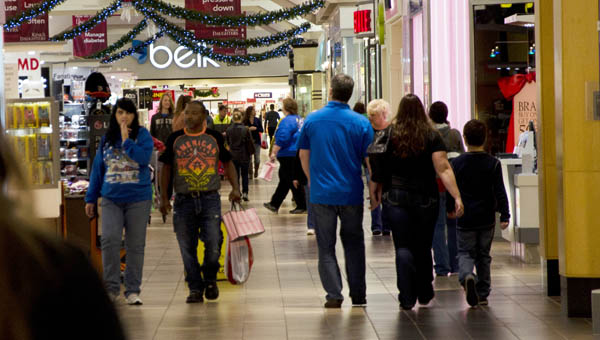 Shoppers were out at dawn on Black Friday to take part in holiday sales at the Ashland Town Center.

ASHLAND, Ky. — Though the big sales kicked off Thursday night, there was still a steady stream of shoppers going about the Ashland Town Center early Friday morning.

The mall opened at 6 p.m. on Thanksgiving Day and had stayed in operation throughout the night for Black Friday.

Michelle Adkins, the mall’s general manager said business had been strong so far.

“I talked to some of our tenants this morning, and they said sales have increased from where they were last year,” she said.

Adkins said one of the big draws on Thanksgiving was JCPenney, where the store had given out a limited $500 gift cards for their opening.

She said some stores are popular with Black Friday shoppers every year.

“We have the ones that drive business like Victoria’s Secret and Bath & Body Works,” she said. “They were selling special totes this year.”

A family from Wheelersburg was among the early morning shoppers.

Alex Morris, Jessie Morris and Gina Smith said they arrived at about 7:50 a.m. This was the second year they had shopped on Black Friday.

Alex wanted to go to Dick’s Sporting Goods, while Jessie was drawn to Belk.

“They had a pair of boots I wanted,” she said.

Mary Sergent, of Ashland, was there with her daughter Meredith. They arrived at 5 a.m.

“It’s a tradition,” Mary said. “My sister and I always came and, now that we have kids, we bring them.”

In addition to shoppers, there were those working for a good cause.

Volunteers from Golden Kidz were wrapping presents and collecting donations.

Keri Dennison, of Ashland, was at the table working. Her mother founded the group to provide financial and emotional assistance to children diagnosed with cancer.

She was joined by Heather Payne of Ironton, who was anticipating a busy day, once the larger crowds of shoppers arrived.