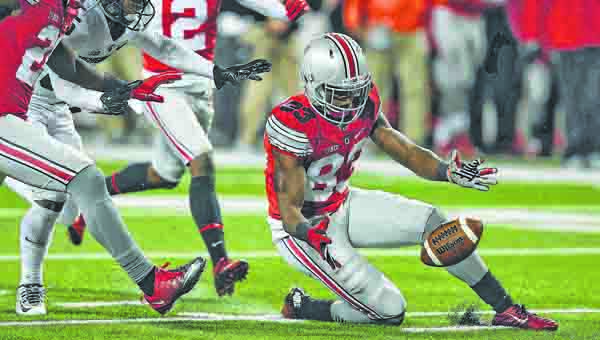 COLUMBUS — There is no way to predict how a football team will react to a devastating loss. It can go either way.

So, Ohio State’s 17-14 loss to Michigan State last Saturday has injected another element of uncertainty into its game at Michigan on Saturday in a rivalry that historically has contained more than a few surprises.

Ohio State hopes to put last Saturday’s loss in the past. But there is no road map that guarantees it will arrive at that destination at noon in Ann Arbor this Saturday.

Repeating as national champion was the goal at Ohio State before the loss to Michigan State. But now, it would take a lot of help and several upsets to get the Buckeyes back to the College Football Playoff.

The possibility is real that Ohio State (10-1, 6-1 Big Ten) could lose to Michigan (9-2, 6-1 Big Ten) and go from being a presumed lock to return to the playoff to being the third-place team in the Big Ten’s East Division in the span of two weeks.

Will that harsh reality motivate the Buckeyes or weigh on them on Saturday?

Then, a previously unbeaten OSU team came out and repeated the same mistakes that had been so costly against the Spartans in a loss to Clemson in the Orange Bowl in its next game.

But turn the clock back to 1998 when another loss to Michigan State crushed the national title hopes of another Ohio State team and it was an entirely different story. The week after that loss, OSU fourght back fiercely and rolled up 627 yards of offense in a 45-14 redemption win over Iowa at Kinnick Stadium.

Obviously, Urban Meyer hopes Ohio State reacts like the 1998 team, not the 2013 team.

“Any time you lose a game maybe they think they’re not playing for what they were playing for before and that’s not true. There’s a lot of football left to be played,” Meyer said on the Big Ten football coaches teleconference on Tuesday.

Defensive end Joey Bosa says Ohio State is faced with a choice after seeing its chance to repeat as national champion probably taken away by the loss to Michigan State.

“There are two ways we can take this loss,” Bosa said. “We could feel sorry for ourselves and not want to come back and lose the rest of the games this season, which none of us wants to do. Or we could come back and use it as motivation like we did last year.

“We have no idea what could happen. We could still get a chance to play in the Big Ten championship. Crazier things have happened,” he said.

Ohio State needs to beat Michigan on Saturday and have Penn State upset Michigan State to get back to the Big Ten championship game for a third season in a row.

Some of Bosa’s teammates who are seniors said their approach is to have a narrow focus on beating Michigan for a fourth straight year.

“Nothing would make me feel better than going up there and winning my fourth pair of gold pants in their place,” offensive tackle Taylor Decker said, referring to the award OSU players get for beating Michigan.

“I think getting a win, a big win, is the best way to bounce back and kind of show what this program is about. If we can’t handle a loss and get better from it, what are we doing?” he said.

Defensive lineman Tommy Schutt said, “It would definitely be tough to lose your last two games going out. We come to Ohio State not to lose any games. Losing last Saturday was tough for us and disappointing. But we’re not going to let that happen this weekend.”

Michigan’s only win against Ohio State since 2003 was in 2011 against an OSU team that finished 6-7 with a freshman quarterback, an interim coach and lived through a season full of turmoil, suspensions and uncertainty. Ohio State has won 12 of the last 14 games between the two teams.

Maybe just bragging rights in the first clash between Michigan’s Jim Harbaugh and Ohio State’s Urban Meyer. The winning players and coaches will walk off the field Saturday not knowing if they’ll have a chance to play for a Big Ten championship. The Buckeyes and Wolverines need a win and a Michigan State loss, at home to Penn State later in the day, to get a spot in next week’s conference title game.

Ohio State RB Ezekiel Elliott against Michigan’s run defense. He lashed out about play calling and announced he wasn’t coming back to school next year after last week’s loss to Michigan State, and then apologized on Twitter. Elliott has run for 1,458 yards and 17 touchdowns this season after having 1,878 yards rushing and 18 scores last year. Michigan allowed Indiana’s Jordan Howard to run for 238 yards and two TDs on 35 carries two weeks ago.

Ohio State: DE Joey Bosa. The 6-foot-6, 275-pound Bosa junior might be the No. 1 pick in the NFL draft if he skips his senior season. He ranks among Ohio State’s all-time leaders with 25 sacks and 49 1/2 tackles for losses in his career. Bosa will be trying to sack Jake Rudock, a teammate at St. Thomas Aquinas in Fort Lauderdale, Florida.

Michigan: DB Jabrill Peppers. He has become a three-way star for the Wolverines, who may feature him on offense more than ever against Ohio State. Peppers is a big-play threat on kickoffs and punt returns. His primary role is as a versatile defensive back, but Harbaugh wants to get him on the field as much as possible.

Ohio State has won three straight and 10 of 11 in the series, its most dominant stretch since winning 11 of 15 from 1954-1968 and leading Michigan to hire Bo Schembechler to face his mentor, Woody Hayes. … Michigan will formally retire Desmond Howard’s No. 21 during a ceremony in the first half of Saturday’s game. … Before losing to Michigan State, the defending national champion Buckeyes had won 23 straight overall and 30 consecutive in Big Ten regular season games.

BEREA (AP) — The Browns believe sacking Johnny Manziel themselves will do him good. One day after taking Manziel’s starting... read more