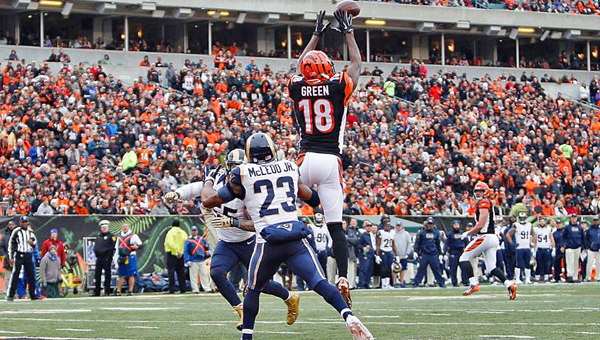 Cincinnati Bengals’ wide receiver A.J. Green makes a leaping catch in the end zone for a touchdown during Sunday’s 31-7 win over the St. Louis Rams. (Photo Courtesy of The Cincinnati Bengals.com)

CINCINNATI (AP) — As the touchdown passes and interceptions piled up, it felt like a throwback game for the Bengals.

Andy Dalton threw three touchdown passes — two of them to A.J. Green — and Cincinnati emerged from its brief skid with an effort reminiscent of its perfect first half of the season, beating the St. Louis Rams 31-7 on Sunday.

After dropping a pair of close prime-time games, the Bengals (9-2) were back in sync against a team that struggles to score and keep up. The 31 points equaled the second-most against St. Louis this season.

In addition to Dalton’s three touchdowns, the Bengals had three interceptions, including one that Leon Hall returned for a touchdown.

The Rams (4-7) have dropped four in a row, in large part because their offense ranks last in the league in passing. They switched quarterbacks last week, but Case Keenum got a head injury during a 16-13 loss in Baltimore and was limited in practice.

Nick Foles, who started the first nine games, returned. The most costly of his three interceptions came when he avoided the rush and floated a pass that Hall picked off and returned 19 yards for a touchdown.

“They’re not always going to be like this, but it’s nice to kind of control the game, especially the way we did,” Dalton said.

The Bengals have limited opponents to 10 points or less in four of the last five games. They were coming off a 34-31 loss at Arizona that was their low point defensively this season.

“We need to stick to our identity,” defensive end Carlos Dunlap said. “Success is precious. You just have to stick to what you do.”

The longest winning streak in Bengals history ended with losses to Houston on Monday night and Arizona on Sunday night. Back at home in an afternoon game, Cincinnati settled down and pulled away.

Dalton was 20 of 27 for 233 yards. He threw touchdown passes of 9 and 18 yards to Green, who hadn’t caught two in a game since the third week of the season in Baltimore. Tyler Eifert also had a 22-yarder, giving him the league lead with 12 TD catches.

Jeremy Hill ran for a season-high 86 yards. He limped off the field in the fourth quarter and got his left ankle taped.

Rams coach Jeff Fisher intended to stay with Keenum if he was healthy, but the quarterback didn’t have a full practice last week. Foles went 30 of 46 for 228 yards. He has seven touchdowns and nine interceptions this season.

The Rams’ best play came when running back Todd Gurley took a snap in the wildcat formation in the second quarter. He handed off to Tavon Austin, who ran for 60 yards — more than the Rams had managed in all to that point. Austin’s 5-yard run finished the drive.

Austin had a team-high 63 yards on four runs. He also caught six passes for 33 yards. Gurley was limited to 19 yards on nine carries, with the Bengals focused on stopping the run game.

St. Louis has scored 13 or fewer points in each of the last three games.

There was more self-destruction by the Rams. Broken coverage left Green wide open for his first touchdown catch.

“Probably one of my easiest touchdowns ever,” Green said.

A penalty for running into the punter extended Cincinnati’s 14-play drive to a field goal in the second quarter.

NOTES: The Rams came in with 30 sacks, but didn’t get to Dalton once. … Cincinnati’s Geno Atkins had a sack, moving him one ahead of St. Louis’ Aaron Donald for most by an NFL interior lineman with eight. … Dalton is 29 yards away from joining Peyton Manning as the only NFL players to throw for 3,000 yards in each of their first five seasons. … Eifert left in the fourth quarter with a pinched nerve in his neck. … Fisher said kicker Greg Zuerlein strained a hip muscle on Friday, which is why the Rams signed Zach Hocker for the game.