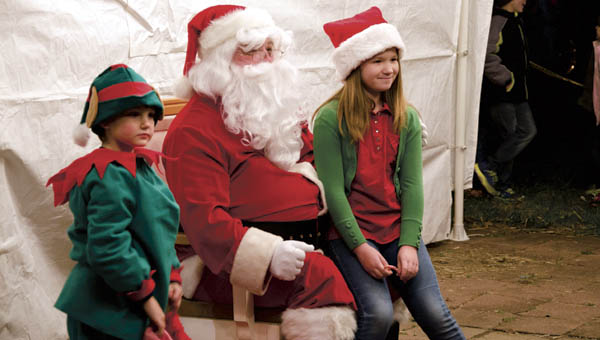 Santa Claus and helpers were on hand for the annual Christmas tree lighting event in Chesapeake on Thursday.

CHESAPEAKE — Cold weather greeted the crowd on Thursday, but it didn’t stop the holiday spirit at the annual Christmas tree lighting in Chesapeake.

Community members braved the weather as temperatures dipped into the 30s at the event in Triangle Park.

The festivities organized by the Chesapeake Area Citizens Coalition, kicked off with an opening prayer from The Rev. Charles Case, of Chesapeake United Methodist Church.

Then the crowd was treated to several holiday songs, such as “Silent Night” and “Rudolph the Red-Nosed Reindeer” from the Chesapeake High School choir and the third grade chorus from Chesapeake Elementary.

Then, after the lights were turned on for the park’s Christmas tree, Chesapeake Mayor Richard Gilpin welcomed Santa, who arrived at the park on a fire truck, accompanied by a dog and an elf.

The crowd continued to mingle and enjoy hot chocolate, while children paid their visits to Saint Nick.

Gilpin said the CACC has hosted the tree lighting ceremony in the village for the past 15 years, and that this year’s crowd was typical of the turnout for past events.

Danny Newman, of the CAAC, said the group, which is comprised of village residents and volunteers, works primarily for the community, organizing events such as the tree lighting and Oktoberfest.

“It’s to give the community something to do,” he said.

“We had our last performance in October, and they’ve been working ever since that,” she said.

Himes said there are two holiday concerts scheduled for area schools in the coming weeks.

Bank robbery suspects were the focus of a raid in South Point Thursday evening. “It was a joint investigation between... read more