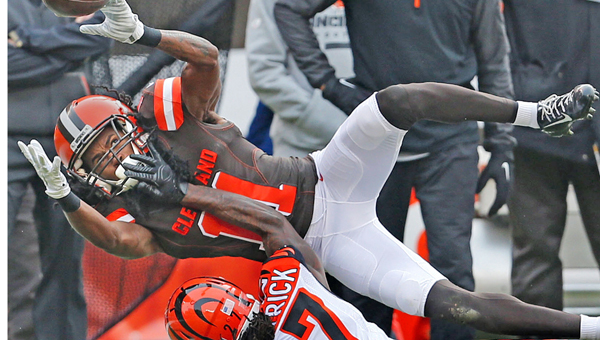 Not for these Cincinnati Bengals. Not anymore.

Andy Dalton threw two touchdown passes and ran for a score as the Bengals moved closer to a playoff berth and the AFC North title with a 37-3 win Sunday over the woeful Cleveland Browns, who dropped their seventh straight and have four more weeks to play in this dismal season.

Dalton connected with A.J. Green for a 23-yard TD pass in the second quarter and the Bengals moved to 10-2 for just the second time in team history. The Bengals were also 10-2 in 1975, but making history is not what Dalton and his teammates are after.

“It’s a new year,” said the quarterback, who notched his 50th career win. “It’s a new mentality for us. We’ve been playing really well and there’s some new pieces. For us, we have bigger goals than just making the playoffs. “

Cincinnati needed a complex scenario to clinch a playoff berth this week, and even if that doesn’t happen, the Bengals are still poised to make the postseason for the fifth season in a row.

They’ve yet to win a playoff game with Dalton, their red-haired, rifle-armed QB, but Cincinnati is determined to end that streak and appear to have all the ingredients to make a Super Bowl run.

And as for being 10-2, Dalton quipped that only means one thing.

The Browns (2-10) lost for the second time in six days and had two more starters go down with injuries in a season that can’t end soon enough. Cleveland QB Austin Davis passed for 231 yards in his first start this season.

Green finished with 128 yards on five catches as the Bengals completed a season sweep of their northern Ohio neighbors. Cleveland has been outscored 98-13 in its past three games with Cincinnati.

Dalton finished 14 of 19 for 220 yards. He eclipsed 3,000 yards this season, joining Peyton Manning as the only QBs in league history to pass for at least 3,000 yards in each of their first five seasons.

Dalton’s 21-yard TD pass to Marvin Jones late in the third quarter made it 34-3, and sent the few Browns fans who bothered staying for the second half heading toward the exits.

Cleveland’s having another disastrous season, and coach Mike Pettine’s future is in serious doubt. The Browns are 2-15 in their past 17 games under Pettine, who earlier this week expressed disappointment at his team’s status and said he may soon have discussions about what’s next with owner Jimmy Haslam.

Following the game, Pettine’s office door remained closed long after the players had left. Pettine stopped to sign a few autographs and talked to some friends before climbing into the passenger seat of his pickup truck for the drive home.

“It’s tough, it’s frustrating,” said Pettine. “You find out who you are.”

Davis was the Browns’ 24th starting quarterback since 1999, and he suffered the same fate as so many before him. He completed 25 of 37 passes, but lost wide receivers Travis Benjamin and Marlon Moore to injuries and was continuously harassed by Bengals defensive linemen.

Pettine picked Davis to play ahead over demoted QB Johnny Manziel, who could get a start next week against San Francisco. Pettine said he’d wait before deciding who will play against the 49ers.

“Part of being a professional is showing up to work when things are tough and when there is adversity,” Browns Pro Bowl tackle Joe Thomas said. “We will find out the character of our teammates moving forward.”

Dalton’s 3-yard sneak capped an 84-yard drive, which started with his 57-yard pass to Green, to give the Bengals a 7-0 lead in the first quarter. Cincinnati went up 14-0 on Dalton’s strike to Green.

Jeremy Hill’s 1-yard TD run made it 27-3, and the Bengals back celebrated by leaping into Cleveland’s stands. That move irritated Browns linebacker Chris Kirksey, who confronted Hill and was called for unsportsmanlike conduct — one of the few times the Browns showed any fight.

“At least I didn’t get pushed back this time,” cracked Hill, who was rebuffed by fans last season.

This season, the Bengals are winning everything.

NOTES: Bengals TE Tyler Eifert, who leads the league with 12 TD catches, sat out with a neck injury. … Bengals S Reggie Nelson recorded his league-leading seventh interception. … Green joined Randy Moss as the only receivers to have 1,000 yards in each of their first five seasons.