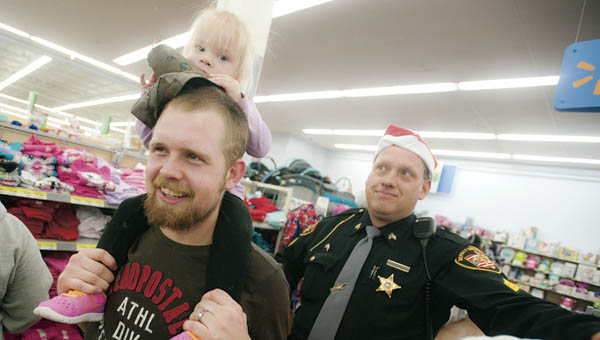 Shop With a Cop helps children in need

SOUTH POINT — State, county and local law enforcement officers descended on the Wal-Mart in South Point on Monday…for a good cause.

The officers were there to take part in the annual Shop with a Cop program, helping about 65 underprivileged kids from throughout Lawrence County to have a better Christmas.

Lawrence County Sheriff Jeff Lawless said the program is in its seventh year and there is “dire need’ to bring joy to children from some homes.

“We’re in an economically disadvantaged area and unemployment is high,” he said. “We see the need to put happy faces on kids.”

Lawless said the officers get a list of underprivileged children and try to pick a different group of youth each year so that no one is left out.

The program is paid for by donations and sponsors, as well proceeds from the annual apple butter sale by members of law enforcement.

The cops, wearing Santa caps, met the children and their family members in the store’s lawn and garden center, before proceeding to the clothes department, where the shopping began with officers were paired with a child.

The first priority is to get items of necessity for them, Capt. Gleo Runyon, of Coal Grove Police, said.

After getting clothing, bedding and other needed items, the money left in the budget is used to get the children toys.

In the electronics department, officers helped children pick out tablets and games, while in the toy section, some of the girls looked through the selection of dolls.

“She has the same hair color as you,” Lynn Stewart, of Lawrence County Adult Probation, said of the doll picked out by Summer Salyers.

When asked what the doll was named, she said “Baby.”

“You’re being taken into custody,” the figures said when a button was pushed.

Once the shopping was completed, the group returned to the garden center for checkout, where a table of refreshments was waiting.

Bobby Borders, of South Point Police, said he was paired with a little girl, and they talked about the Disney film “Frozen.”

Aaron Christian, of Chesapeake Police, said he helped a boy shop for clothes, shoes and games and a controller for an Xbox.

“It was amazing,” he said. “It feels good to help kids out.”

Following the trip to Wal-Mart, the families and the officers went to the nearby Ponderosa restuarant, where they were treated to a dinner with Santa, sponsored by City National Bank and Hall Funeral Home.