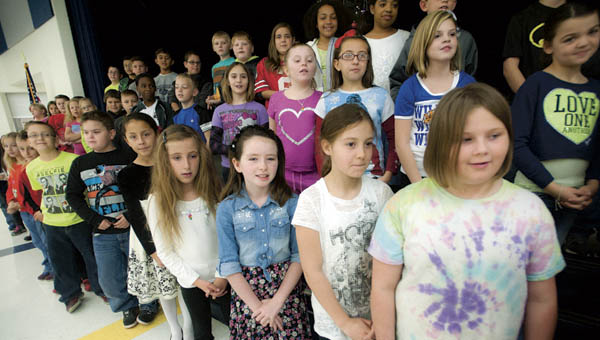 Students from South Point Elementary School rehearse for their Christmas program on Tuesday.

It was standing room only for parents at South Point Elementary School on Tuesday.

Jill Young, a music teacher with the school, said the students have been preparing for some time.

“They’ve been rehearsing since October. We do Christmas songs at Halloween,” she said. “They’re excited to do it.”

The show consists of a number of traditional songs, such as “Away in a Manger” and “Jingle Bells,” as well as some originals, such as “Turn off that Nose,” a number about Rudolph the Red-Nosed Reindeer.

This is the third year the school has put on a Christmas program, after bringing it back from a hiatus.

Bill Christian, the school’s administrative assistant, said it’s great to have the program.

“A lot of school’s don’t have the traditional Christmas programs anymore,” he said.

The children were hard at work earlier in the day with last minute rehearsals, led by Young at the piano.

Christian noted how tight the performance was.

“They sound great,” he said. “They’ve been working on this for a while and know these songs.”

The packed cafeteria for Tuesday’s show was not a surprise.

Christian said the show is especially popular with the community and has been standing-room only for the past few years.

Ironton Shop with a Cop set for Saturday

Although the county Shop with a Cop took place Monday evening at the South Point Wal-Mart, this is the first... read more