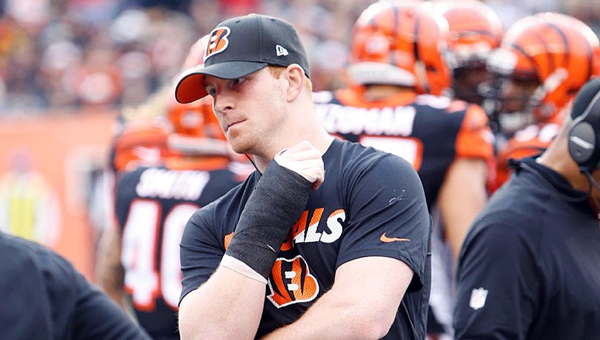 Cincinnati Bengals’ quarterback Andy Dalton watches Sunday’s game from the sidelines after suffering a broken thumb in a 33-20 loss to the Pittsburgh Steelers. (Photo Courtesy of The Cincinnati Bengals.com)

CINCINNATI (AP) — Andy Dalton’s right thumb hurt a bit as he came to the sideline. He gripped a football to gauge how much he had hurt his passing hand while making a tackle.

One painful squeeze told him something was badly wrong.

Dalton broke his thumb while making a tackle after his interception on Sunday, turning Cincinnati’s season upside-down in an instant. With a chance to clinch the AFC North at home, the Bengals lost their quarterback and got blown out, too.

The Pittsburgh Steelers battered backup AJ McCarron while pulling away to a 33-20 victory that left the division and the top AFC playoff seed up for grabs.

Cincinnati (10-3) is just waiting to see how long it will be without Dalton, who had the NFL’s top passer rating heading into the game. He will see a specialist on Monday to get a better idea of the treatment options.

“Mentally I’m fine,” said Dalton, wearing a black cast. “It’s unfortunate it happened at this point in the season. I’m doing all right. There are a lot of people who are way worse off than I am.”

The Steelers (8-5) rumbled with the Bengals during pregame warmups and then led the whole way, sending Cincinnati to its first lopsided loss of the season.

William Gay returned one of McCarron’s passes 23 yards for a touchdown, and Ben Roethlisberger had another good day as Pittsburgh’s resurgent offense kept rolling. Pittsburgh has scored 30 points in five straight games, a franchise record.

The game — and potentially Cincinnati’s season — turned on one interception. Stephon Truitt picked off Dalton’s shovel pass in the first quarter, and Dalton got hurt while making the tackle.

Dalton has been one of the NFL’s most durable quarterbacks, missing only half a game during his five seasons because of injury.

Now, the Bengals’ chances are in the hands of a second-year quarterback from Alabama who missed all of his rookie season with a sore passing shoulder.

“If you don’t (have confidence) you’re doomed,” said McCarron, who won two national titles with the Crimson Tide but had thrown only four passes in the NFL until Sunday. “I’ve always believed in myself when I’ve stepped between those white lines where it’s a nasty and dirty game. If you lose confidence it can go bad for you real quick.”

McCarron threw a 66-yard touchdown pass to A.J. Green, who ran past cornerback Antwon Blake, but also threw a floating sideline pass that Gay returned for a touchdown and a 23-7 lead early in the second half.

McCarron finished 22 of 32 for 280 yards with two touchdowns and a pair of interceptions that led to Steelers touchdowns.

The Bengals had the fewest injured players in the league heading into the game, but also lost tight end Tyler Eifert to a concussion in the first half. Eifert was leading the NFL in touchdown catches.

The Steelers have recovered from significant losses of their own — Roethlisberger missing time with a sprained knee, running back Le’Veon Bell out for the season with a knee injury — and hit their stride in the last five games.

Roethlisberger has been at his best. He went 30 of 39 for 282 yards with an interception as the Steelers protected a big lead in the second half. DeAngelo Williams ran for a pair of touchdowns, and Chris Boswell made field goals from 42, 47, 45 and 31 yards.

The Steelers had looked forward to the rematch in Cincinnati since the Bengals’ 16-10 victory in Pittsburgh on Nov. 1, one that ended with trash talking and tough feelings. The dislike bubbled out during warmups when players from both teams got into a brief shouting-and-shoving match at midfield.

Also, Bengals cornerback Adam “Pacman” Jones — who was inactive with a foot injury — sent a profane tweet about Pittsburgh pregame.

By the fourth quarter, all the drama was gone. Bengals fans headed for the exits after Robert Golden picked off McCarron with 5:14 to go, leaving Steelers fans to twirl their Terrible Towels in celebration as Pittsburgh scored a clinching touchdown.

NOTES: The Steelers have won their last nine games in December. … It was only second time in the last seven games that the Bengals allowed more than 10 points. They came into the game having allowed the fewest points in the NFL. … Tuitt’s INT was the Steelers’ sixth red zone takeaway this season. … Reggie Nelson had an interception for the fifth straight game, a Bengals record. Nelson has six INTs in his last seven games against Roethlisberger.

CLEVELAND (AP) — Sitting on the sideline, Johnny Manziel was angry and frustrated. More importantly for the Browns, he held... read more