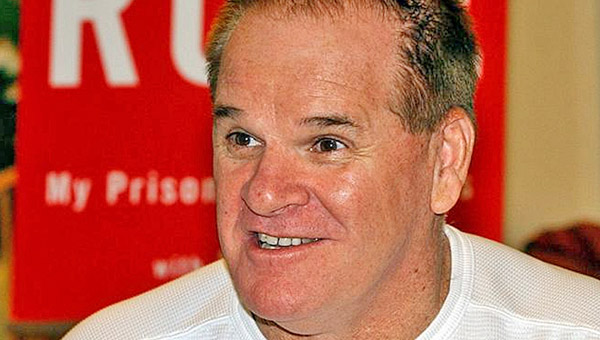 CINCINNATI (AP) — Pete Rose’s application for reinstatement to baseball was rejected Monday by Commissioner Rob Manfred, who concluded the career hits leader continued to gamble even while trying to end his lifetime ban and would be a risk to the sport’s integrity if allowed back in the game.

Rose agreed to the ban in August 1989 after an investigation for Major League Baseball by lawyer John Dowd found Rose placed numerous bets on the Cincinnati Reds to win from 1985-87 while playing for and managing the team.

In one of his first major actions, Manfred said in a four-page decision the career hits leader admitted he has kept on betting legally on horse racing and professional sports, including baseball. Manfred upheld the conclusions of the Dowd report and said MLB obtained additional evidence not available to Dowd: a notebook of betting records from 1986 kept by Rose associate Michael Bertolini.

“In short, Mr. Rose has not presented credible evidence of a reconfigured life either by an honest acceptance by him of his wrongdoing, so clearly established in the Dowd Report, or by a rigorous, self-aware and sustained program of avoidance by him of all the circumstances that led to his permanent in eligibility in 1989,” Manfred wrote.

“Mr. Rose’s public and private comments, including his initial admission in 2004, provide me with little confidence that he has a mature understanding of his wrongful conduct, that he has accepted full responsibility for it, or that he understands the damage he has caused,” Manfred wrote.

“I am also not convinced that he has avoided the type of conduct and associations that originally led to his placement on the permanently ineligible list.”

Rose’s lawyers said he will comment on the decision at a news conference Tuesday.

“While we may have failed at our task of presenting all of the facts to the commissioner demonstrating how Pete has grown and changed over the past three decades, Pete has meaningfully reconfigured his life,” Rose’s lawyers, Ray Genco and Mark Rosenbaum, said in a statement.

“Pete’s fall from grace is without parallel, but he recognizes that it was also of his own making,” they said.

“As such, Pete seeks to be judged not just by the mistakes of his past, but also by the work he has done over the last three decades to take responsibility for his actions.”

Manfred said when he met with the 74-year-old Rose, the 17-time All-Star at first was not forthcoming about his current gambling.

“Rose initially denied betting on baseball currently and only later in the interview did he ‘clarify’ his response to admit such betting,” Manfred wrote.

Rose’s conduct violated Major League Rule 21, which calls for a lifetime ban for betting on any game “with which the bettor has a duty to perform.”

“Allowing him to work in the game presents unacceptable risk of a future violation by him of Rule 21, and thus to the integrity of our sport,” Manfred wrote.

The ban prevents Rose from working for any major league team or minor league affiliate, but he is allowed to make ceremonial appearances with the commissioner’s permission and may work for third parties such as Fox, which hired Rose this year as a baseball analyst.

Players on the permanently ineligible list also may not appear on the Hall of Fame ballot, a decision taken by the Hall’s board in 1991. Reds President Bob Castellini said he hopes the Hall will reconsider its decision.

“We and the fans think he deserves that opportunity,” he said.

At the time the ban agreement was announced, then-Commissioner A. Bartlett Giamatti said: “The burden is entirely on Mr. Rose to reconfigure his life in a way he deems appropriate.”

Rose applied for reinstatement in September 1997 and met with Commissioner Bud Selig in November 2002, but Selig never ruled on Rose’s application. Manfred succeeded Selig in January, and Rose applied again on Feb. 26 to end the ban. He met with Manfred on Sept. 24.

“It was great opinion,” Dowd said. “I’m proud of the commissioner for protecting the integrity of the game.”

Manfred called former Commissioner Fay Vincent on Monday to inform him of the decision. Vincent was Giamatti’s deputy and hired Dowd, then became commissioner following Giamatti’s death on Sept. 1, 1989.

“I think he is a tragic figure,” Vincent said. “He believed he was a great ballplayer, that he could do anything he wanted and that baseball would never have the guts to throw him out.”

“He lied about betting on baseball right in the commissioner’s office,” Dowd said.

Rose repeatedly denied betting on baseball until in his 2004 autobiography, “Pete Rose: My Prison Without Bars.” He reversed his stand and acknowledged he bet on the Reds while managing Cincinnati. Manfred said that while Rose admitted to him betting on Reds’ game in 1987, he didn’t remember facts established by the Dowd report showing he bet on baseball in 1985 and 1986 as a player.

Rose submitted two reports to Manfred, one by Dr. Timothy Fong, co-director of the UCLA Gambling Studies Program and director of the UCLA Addiction Psychiatry Fellowship. Manfred said he gave the report little weight because it was inconsistent with what Manfred told him.

The second report was a polygraph test taken on Aug. 5 by a consultant retained by Rose’s representatives. Manfred wrote the polygraph test concluded “no opinion” based on technical reasons that were not Rose’s responsibility.