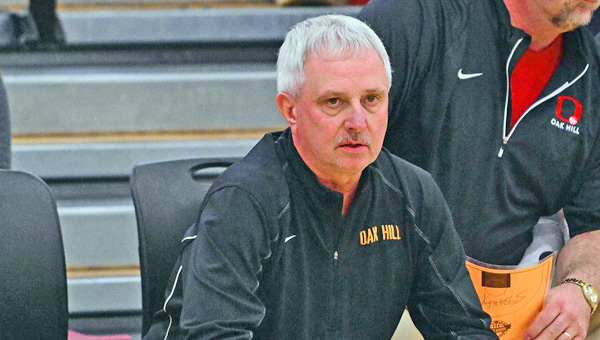 “When” will be Saturday, April 23, at 5:30 p.m. at the Columbus Marriott on Cassady Avenue as the Ohio High School Basketball Coaches Association inducts Norm Persin into the Hall of Fame.

Persin — the longtime Chesapeake and Oak Hill boys’ head coach — will be joined by Steve Williman of Liberty Benton, Ron Moschella of Youngstown Boardman and Columbiana, and Bob Von Kaenel of Tuscawaras Valley and Dover as this year’s newest members to the coaches’ Hall of Fame.

A graduate of Warrant G. Harding High School in Warren, and a 198 graduate of the University of Rio Grande, Persin has racked nearly 700 career wins and a state championship among his storied career.

Norm is the son of Jack and Elizabeth Persin (both deceased). Norm credits his parents with teaching him responsibility, loyalty and an old school working ethic. During his high school career, Norm credits Jack Gysegum (Basketball) and Robert Wachtel (Baseball) as the ones who guided him to push himself to be better each time he stepped on the playing field.

In 1969-1971 he played for Art Lanham at Rio Grande and then eventually took over for Art due to back surgery. Norm also coached the baseball team in 1972 to the MOC title and the label of “Coach” began.

For the next 21 years, Chesapeake High School became the home for Persin and Panther Pride began as he amassed 16 league championships (12 consecutive) and 10 district championships. Five times the Panthers reached the regional championship game.

In his first year at the helm, the Oaks won the district championship — the first in school’s history as well as the first ever in Jackson County for a boys’ team.) The following year the Oaks reached the regional championship game and in 2009 Oak Hill made history with a state championship victory over Kalida.

With an overall record of 672-188 in 38 years, Norm is currently fifth on the all-time win list in Ohio. His coaching awards are maybe more impressive and include: 2009 National High School Coach of the Year, Ohio’s Coach of the Year on seven different occasions, coached in the McDonald’s All American Classic in 2010 and the Jordan Classic in famous Madison Square Garden in 2007, and received the Paul Walker Award in 2001 for contributions made in the game of basketball.

He has served as a director for over 20 years on the OHSBCA while also helping to coordinate the Ohio-Kentucky game. In 2013 Norm coached the first ever Ohio team in the National Federation Tournament in which the Ohio Team went undefeated.

He has also coached in the North-South Game, Ohio-West Virginia Game and the Wendy’s Classic. Norm currently works many Nike Elite events and has spoken at several state clinics.

Success cannot happen without great people in the program. Coach Persin has been blessed with dedicated players and loyal assistant coaches that have made major contributions to greatness.

His greatest fans are his family. His son Jimmy and his wife Nicole; daughter Haley and husband Mark along with four tremendous grandchildren Marley, Pierce, Jude and Miles keep his spirits up and help keep Norm young. Other family members include his brother Dennis and sister Diane, both residing in North Carolina and Florida.

Norm continues to teach social studies (year 42) at Oak Hill along with serving as Athletic Director and Boys Basketball Coach. In 2017 Norm will be inducted into the Ohio Hall of Fame joining greats like Bob Knight and Jerry Lucas.