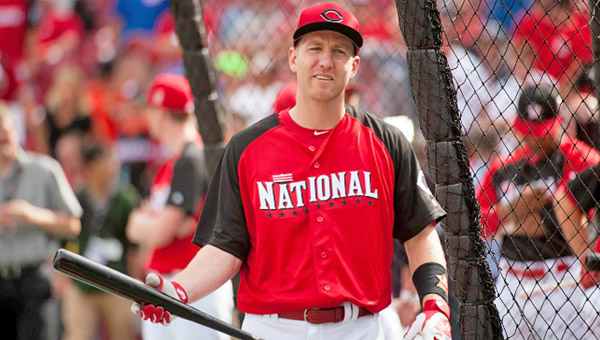 CHICAGO (AP) — The White Sox were looking to add some pop while solidifying third base, and they are counting on Todd Frazier to provide it.

The All-Star third baseman was acquired from the Cincinnati Reds on Wednesday as part of a three-team, seven-player trade that also included the Los Angeles Dodgers.

The 29-year-old Frazier, who won last summer’s All-Star Home Run Derby in Cincinnati, was an NL All-Star in each of the last two seasons and hit .255 this year with 43 doubles, 35 homers and 89 RBIs. “I’m pretty excited,” he said. “I’ve got to be truthful with you. I know it’s the American League. I know it’s gonna be a little different. It might take a little time to get acclimated. But I just saw the lineup on TV. It kinda put a smile on my face to see the guys we’ve got.”

The move gives the White Sox a run producer and solid defensive third baseman who grew into a clubhouse leader in Cincinnati.

They hope he can help lift a team that finished a disappointing fourth in the AL Central at 76-86 and struggled to score despite the presence of Jose Abreu in the middle of the lineup. The White Sox ranked 28th in the majors in runs, and their third basemen were 29th in batting average and last in RBIs.

“Certainly, we feel a lot better,” White Sox general manager Rick Hahn said. “You’ve got a middle-of-the-order presence, obviously a power hitter with extra-base ability as well and someone to help solidify the middle and make it a little tougher to come through here.”

Frazier has a $7.5 million salary next year and can become a free agent after the 2017 season.

His arrival means the White Sox will go with Brett Lawrie — acquired from Oakland last week — at second rather than third. Hahn said the White Sox were talking to Cincinnati about a trade for Frazier when that deal was completed.

“Brett gave us an answer at that time at third base should we do nothing else, and we also knew that if we were able to get Todd, Brett had the versatility to help us at second as well,” Hahn said.

Frazier — a Jersey boy dubbed the ToddFather in Cincinnati — had in many ways become the face of Cincinnati’s franchise after he won the All-Star Game Home Run Derby so dramatically in July at Great American Ball Park.

Teams started expressing an interest in Frazier during the winter meetings last week. Reds president of baseball operations Walt Jocketty said parting with him was not easy, nor was the call informing him of the deal.

Frazier’s Home Run Derby title was the best moment in Cincinnati’s disappointing season that ended in a 64-98 record and prompted the Reds to start a full-scale rebuilding.

They dealt starting pitchers Johnny Cueto and Mike Leake in July, leaving them with an all-rookie rotation. They had a deal in place to ship closer Aroldis Chapman to the Dodgers this month before an offseason domestic dispute became public, putting the trade on hold.

Jocketty is talking to other teams about Chapman.

“We’re not close to anything yet, but we continue to talk to clubs and clubs have expressed interest,” he said. “I don’t know how to determine when that might happen.”

Cincinnati plans initially to move shortstop Eugenio Suarez to third base, with Zack Cozart expected to return from reconstructive knee surgery. The Reds plan to use Peraza as a second baseman.

The Reds have tried to trade Brandon Phillips, but his contract has been an issue — he is owed $13 million next year and $14 million in 2017.

The big-budget Dodgers haven’t made an extraordinary splash this winter, but President of Baseball Operations Andrew Friedman believes this deal bolsters his roster while putting Los Angeles in position to make bigger moves.

“We’re obviously having a lot of conversations that involve us trading prospects and different scenarios,” Friedman said. “(This trade) wasn’t necessarily directly connected, but every move we make has some connection, and extending our talent base is helpful on multiple fronts. I do know some teams that have some interest in some of the guys that we acquired, but these guys are really interesting. They’re good, young players.”

The 24-year-old Thompson, a Los Angeles-area native, made his big league debut in August and hit .295 with five homers and 16 RBIs in 44 games. He was an International League All-Star this year for Triple-A Charlotte.

Friedman said Thompson is an “exceptional athlete with strong bloodlines. We feel like he has a chance to really continue to improve, really feel like the arrow is still pointing up.”

Montas was 0-2 with a 4.80 ERA in two starts and five relief appearances for Chicago last season and 5-5 with a 2.97 ERA in 23 starts at Double-A Birmingham. Friedman seemed particularly high on the hard-throwing 22-year-old prospect.

“I feel like he’s got a real good chance to be a real good major league starting pitcher,” Friedman said, even suggesting Montas had a shot to crack new manager Dave Roberts’ opening day rotation. “And if not, we feel like he can be a real impact bullpen arm.”

Friedman said the Dodgers weren’t interested in getting Frazier in the deal because they’re set at third base with Justin Turner and didn’t want to ask Frazier to change positions.

Schebler, 25, also made his big league debut this year and hit .250 with three homers and four RBIs in 19 games for the Dodgers.

Peraza, obtained by the Dodgers from Atlanta on July 30, made his major league debut on Aug. 10 and went 4 for 22 in seven games.

Buckeyes pull away from NIU

COLUMBUS (AP) — Although Jae’Sean Tate is a sophomore he is one of the most experienced players for Ohio State... read more